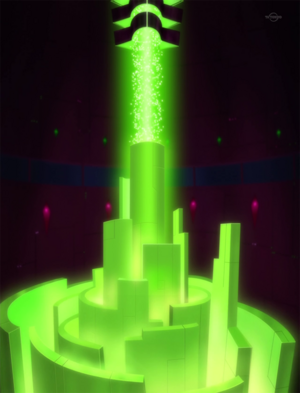 The ARC-V Reactor, known simply as ARC-V in the Japanese version, is a device that appears within Duel Academy in the Yu-Gi-Oh! ARC-V anime. Leo refers to it as the "fifth dimension".[1] 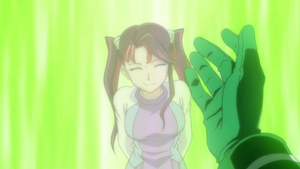 Leo imagining his daughter coming back to life.

Leo Akaba constructed the ARC-V Reactor for the purpose of uniting all Four Dimensions and reviving his daughter, Ray, by fusing her reincarnations back together. In order for the process to work, Leo ordered his followers to card thousands of people in Xyz Dimension (and eventually extended to Standard Dimension) into cards to use their life energy to power up the machine. At this time, he tasked Dennis McField, Yuri, and Sora Perse to find and capture Ray's reincarnations, signified by the Four Dimension Bracelets that each of them possess. Yuri successfully captured Rin and Lulu Obsidian, but was unsuccessful with Zuzu Boyle as her bracelet prevented him from coming close to her, and his plan was further delayed after Celina escaped into Standard Dimension. 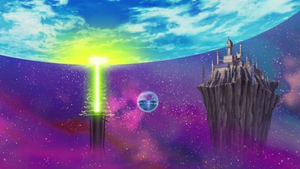 The ARC-V Reactor fusing the Four Dimensions back into one.

Later, after Celina was brought back by Barrett and brainwashed by a Parasite Monster, Leo used her to lead a troop to capture Zuzu. After disposing the Doktor and freeing the girls from the Parasite Monsters, Leo also transported the four girls inside glass tubes to the machine with four of them surrounding it. The operators then started the machine, gathering energy to sufficient levels before transporting each of them into the ARC-V Reactor, starting with Zuzu, followed by Lulu, then Rin, and finally Celina, with the dimensions corresponding to each girls being absorbed at the same time. However, being impatient, Leo ordered the transfer of Lulu before the energy reaches the sufficient level at 70% and Celina's transfer before the energy reached the transfer area. This greatly impacted the outcome as the ARC-V Reactor was activated at full power, Ray was not yet revived and the four dimensions slowly started to become one. However, the machine eventually recreated the Four Nature Cards and revived Ray in her spirit form.

Following the battle against Z-ARC and the Standard Dimension rebirth into the "Pendulum Dimension", the Four Dimensions were split again but remnants of the ARC-V Reactor remained. This created Interdimensional Corridor Gates, connecting the dimensions with one another. Ray's fate was unknown but Declan theorized that she was most likely still inside the remnants of the ARC-V Reactor. Leo managed to collect what appeared to be Ray's spirit, though he was unsure that it was Ray and theorized that Ray's fragments would eventually revive as Zuzu Boyle.

Ultimately as Yuya Dueled several of his allies in order to restore Riley's smile as she was rendered as a catatonic infant, he faced Declan in a final Duel to test his qualification as a pro. Yuya succeeded in defeating Declan which in turn Riley's smile back and purifying Z-ARC. In addition, Ray was reborn as Zuzu after reacting to the Duel.