A Soldier from the Fusion Dimension: Sora Perse

A Soldier from the Fusion Dimension: Sora Perse is an event that occurred in Yu-Gi-Oh! Duel Links, based on Sora Perse's character development in the Yu-Gi-Oh! ARC-V anime. It allows the player to unlock Sora Perse as a playable character. 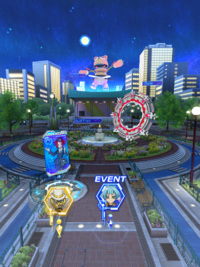 Duel World (ARC-V) during the event

Sora Perse initially appears with his Level 10 Deck in Duel World (ARC-V). After defeating him, he will start to appear in Duel World (ARC-V); this appearance is time-based. He can also be Dueled against at the Gate once the player has completed Special Episode #1. At first, he will only be able to be challenged at Level 10. To challenge him at higher Levels (up to Level 40), the player needs to defeat him at least once at the highest available Level (e.g. he needs to be defeated at Level 10 before he can be challenged at Level 20).

In order to challenge Sora Perse at a certain Level, the player needs to spend a corresponding amount of Candies, which is as follows:

In Action Duels, both Duelists begin with the EX Skill "Action Card" and a shared Dueltain Meter that increases in percentage when various conditions are met, as detailed in the table below. When challenging Fusion Duelist Sora Perse at Lvl. 40 and Lvl. 60, the Dueltain Meter will begin at 30% and 50% respectively.

By using the EX Skill "Action Card", both Duelists can activate Action Cards to use their effects once per turn. After an Action Card is activated, it can no longer be used again until the Dueltain Meter exceeds 160%.

When a Special Episode is unlocked, a special character will spawn in Duel World (ARC-V). The character appears as an opponent who does not provide any Duel Rewards. After defeating them, the episode is completed, and a cutscene plays. During the event, previously viewed cutscenes can be watched again from the Scene Album on the event page.

When Dueling against Sora Perse Level 40 or higher, these are the only cards that can drop; at lower levels, cards from the standard pool for Legendary Duelists may also drop.