The dorm in its current state

The Abandoned Dorm, also known in Japan as the old Blue Dorm, is a setting in Yu-Gi-Oh! GX. 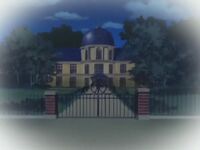 The dorm before its abandonment, in Atticus' memory

A year before the events of the anime, Atticus Rhodes, Yusuke Fujiwara and a few other Obelisk Blue students stayed in this dorm, but over time, they vanished.[1] After the disappearance of these students, many tried to find them, but to no avail and the other students were later prohibited from entering the dorm.[2] A cover-up story was fed to the public, which stated that the missing students were in a Duel research program abroad.[3] The official files of the missing students were stored in the dorm in order to hide them, since no one was permitted to enter.[4]

Yusuke performed a ritual to summon Nightshroud in the dorm. This pulled him to the World of Darkness and infected the dorm with dark powers. Atticus received Nightshroud's mask from Yusuke as a parting gift after witnessing this.[1] As a result, Atticus was eventually chosen by Kagemaru to be one of the Shadow Riders. Upon his reappearance, he was saved by Jaden Yuki.[5] Lyman Banner, who had aided Kagemaru's plot, would later state that he and Kagemaru were unaware where Atticus received Nightshroud's influence from.[1] Banner had used the basement of the dorm as his personal alchemy lab, including a resting place for his original body.[6]

Both Chancellor Sheppard himself[4] and a reporter named Gerard later dedicated themselves to solving the mystery.[7] The dorm would later be destroyed by Honest, the Spirit Partner of Fujiwara, in his quest to find out what happened to his master.[8]

Due to Fujiwara's ritual, it appears that the dorm was imbued with some form of shadow magic. The angry spirits of the dorm were able to start a real Shadow Game mid-way through Jaden's Duel with Titan, who had been holding a faux Shadow Game before that. Upon his loss, he was pulled into a different World of Darkness.[2] After Jaden's defeat of Kagemaru, the remaining students were released.[1] 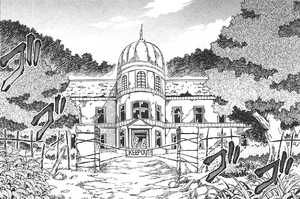 The Abandoned Dorm in the manga

The dorm has also made an appearance in the manga, as the setting where Reggie MacKenzie Dueled against both Midori Hibiki and Jaden.[9]