Abyss is the final Number's Guardian that appeared in the Yu-Gi-Oh! ZEXAL anime. He is a mighty sea god and the spirit form of "Number 73: Abyss Splash", entrusted with two Mythyrian "Numbers" within an underwater temple. He later tests Reginald Kastle in a Duel to revive his original memories and inherit both "Numbers".

Abyss is fittingly similar to his card form, without the helmet. He has sky blue skin which is adorned by blue armor slashed with gold. He wears a gold headpiece on his forehead - set with an aquamarine-colored stone - and has black hair and a beard arranged in a similar way to Shark's hairstyle.

As a spirit of a "Number", Abyss possesses great power. He is capable of possession, shown when he did so to Rio Kastle.[2] Similarly, he is also capable of saving Nash and Marin and sending their souls without their memories into Reginald and Rio Kastle, who had recently died in a car crash.[3]

Vector offered a blood sacrifice to Abyss in order to receive aid in the destruction of the United Lands of the Poseidon Ocean from the latter. As a result, Abyss laid waste to the city and killed many of the Kingdom's soldiers. Marin offered herself as a sacrifice afterwards to revive another god and purify Abyss of Vector's control.[4] Later, during Nash's attack on Vector's lands, Abyss aided Nash in fighting Vector's army. He was Summoned in Nash and Vector's Shadow Game.[5] 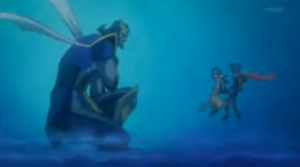 After Nash and Marin were trapped in a dark dimension by Vector, Abyss rescued them; offering to send their souls to Earth at the expense of their current memories, where their souls were transferred to Reginald Kastle and Rio Kastle after the latter siblings were killed after a car accident.[3]

When the Different Dimension Airship neared the undersea ruins, Abyss called out to Rio Kastle, who was on-board. He was eventually able to influence her enough to get her to jump off the ship. Shark, Yuma Tsukumo and Astral followed. They tracked Rio to the temple and were led through a maze, where they were separated. Shark reached the heart of the temple, where he found Abyss possessing Rio. Abyss claimed that he and Shark were destined to fight and urged Shark to "awaken", as he would inherit Abyss' power. Shark agreed to Duel and Abyss gained a great advantage through "Gorgonic Guardian". He proceeded to show Shark visions of his past life, when he was the king of the United Lands of the Poseidon Ocean[2]

Abyss insisted that just as his past life lost his sister, he would lose her here too, due to the weakness in his heart. Ceasing his control over Rio, she fell a great distance, but was caught by Yuma. Abyss then entrusted "Number 94: Crystalzero", the second Mythyrian "Number" tied to the ruins to Shark and told him to defeat him and reclaim his memories as the king who led the world. After his defeat, Abyss admitted to Shark that he was following orders from his past life to restore his former memories before disappearing, leaving his "Number" card to Shark.[4]