It appears briefly in one of the Duel Monsters Spirit World dimensions, attacking a group of Garuda the Wind Spirits that had been harassing weaker monsters.[1] 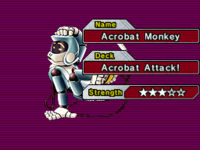 Acrobat Monkey appears as a Duel Monster Spirit that can be unlocked as a partner for the player by defeating it multiple times. It can be found at the north side of Duel Academy and at the Dried Well after defeating Kagemaru.

Acrobat Monkey makes the player more likely to run into other Duel Spirits that can be obtained as partners, with the likelihood improving further as the spirit is levelled up.