From Yugipedia
Jump to: navigation, search
For other versions of this character, see Adrian Gecko (disambiguation).

Adrian Gecko, known in the Japanese version as Amon Garam, is a student hailing from East Academy who enters Duel Academy in the third year. Reserved and secretive, Adrian is a neutral character whose actions seem to only serve the Gecko Family and himself. However, after obtaining the spirit of "Exodia the Forbidden One" in the third alternate dimension, he intends to rule it as a world where darkness, and evil will vanish. He thus acts as a secondary antagonist towards Jaden and the primary antagonist, Yubel.

He is one of the few characters who did not return after Jaden defeated Yubel.

Adrian is a swarthy-skinned, extremely muscular young man. He has magenta hair that stands up in wavy spikes, and eyes described by Kazuki Takahashi as kind and soft. Adrian wears large ovular spectacles, and his ears are pierced with black studs. He wears a necklace of large black beads with a blue tassel. Adrian wears a sleeveless brown jacket with an Academy-style clasp, an orange sash, tan pants, and black shoes and socks that cover his pants up to the knees. He also begins wearing a teal cape after being transported to another dimension. After making a deal with Yubel, Adrian gains her Devil Arm in the place of his left arm until he rids himself of it with the power of Exodia. He never uses the Devil Arm's ingrown Duel Disk; he consistently uses his own unique model.

In the dub, Adrian presents himself as somewhat of a party animal, and is witty to the point where he sometimes pokes fun at the series itself, such as in episode 112. Adrian appears to be extremely loyal to his family despite his personal views as shown when he saved his brother from death even though he would become the heir to the company. When working for Yubel, Adrian becomes more malicious such as manipulating Jaden and sacrificing Echo. It is later revealed however that everything he did was to make the world a better place without pain and suffering.

In the original, he takes a highly philosophical approach as a Duelist, once quoting René Descartes "Cogito ergo sum" to express the meaninglessness of passionate battles such as the Survival Duels announced by Thelonious Viper. Adrian uses the aforementioned quote several times as well as some other latin phrases.

In the dub, Adrian speaks with a youthful, yet monotone voice. For some reason, he never uses any contractions, which gives him an almost robotic quality.

In the original, Adrian speaks with a deep voice and occasionally quotes Latin philosophers.

His given name in the Japanese version is derived from an alternate spelling of the name of an Egyptian air deity, Amun. His dub name may be a reference to Gordon Gekko from the 1987 film Wall Street, due to his riches.

Adrian is the eldest son of the Gecko Family (Garam Group; ガラム財閥, Garamu Zaibatsu), which has considerable influence over the world's petroleum, heavy chemical industry, and information technology. Abandoned by his parents when he was young, Adrian developed an inferiority complex that convinced him that he had nothing left to live for. He observed the sky and awaited death but was one day adopted by the Gecko Family which intended for him to become its heir in light of the family's failure to produce a biological child to fill the position. However, when a son named Shido was finally conceived, Adrian grew jealous of his younger brother (in the Japanese version, he contemplates killing him), but chose to continue working diligently for his sibling's sake. In the dub, it states that he completely forgot about his vendetta during the timeskip.

From the outset of the third year Adrian works undercover to learn more about Viper's plot and secretly acquire Yubel's power for himself, being aware he was affiliated with the spirit. Eventually, he is approached by Thelonious Viper himself, who threatens to return him to East Academy if he refuses to Duel in a Survival Duel. Suspecting that he will set the Bio-Band energy absorption level on maximum—which can cause death—for his scheduled Duel, Adrian invites students to a party to participate in Survival Duels with one another, intending to overload Viper's project. As he leaves the Obelisk Blue dormitory, however, Chazz Princeton lifts him off the ground by helicopter, challenging him to a Duel. Intrigued by Chazz's determination stemming from his time at North Academy, Adrian reveals the hellish past that he too has suffered. Despite this similarity, he concludes that Chazz is "nothing special", and that although he wins the Duel, the energy absorption level on his Bio-Bands was not minimized enough to prevent him from collapsing. 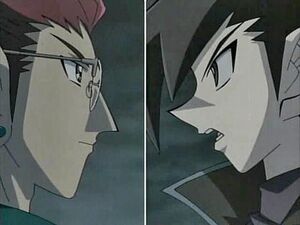 Adrian in his Duel with Chazz Princeton

After recovering from the Duel, Adrian manipulates Jaden and the others into acting as decoys while he infiltrated Viper's hideout. The two spar for ownership of a certain card that Viper possesses after revealing that Adrian also works out at the gym, explaining the result of his built arms, of which the Gecko Group holds interest, but the spirit within the Survival Duel energy chamber restrains Adrian just as he seems to gain the upper hand. Managing to temporarily short circuit the facility’s power source, Adrian escapes and finds the machine responsible for Survival Duel energy absorption, but succumbs to the darkness of his heart and chooses not to shut it down. Adrian then takes Yubel's arm and hides in the library.

While trapped in the alternate dimension along with Jaden Yuki and company, Adrian teams up with them to fight off the Duel zombies but mysteriously erases a file about him while on a Gecko submarine, trying to get medicine for an ill Blair Flannigan. On numerous occasions he meets Marcel, who was possessed by Yubel who had him spy on Jaden. Asking Yubel why it didn't choose him to use its power Yubel replies that Marcel had an unexpected and greater darkness in his heart at the time. Enraged over this, Adrian continues to monitor Yubel and ends up stranded in the alternate dimension after Yubel is defeated by Jaden Yuki and Jesse Anderson. 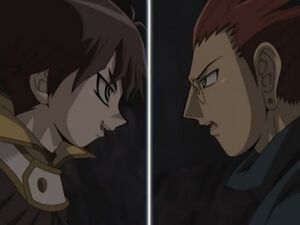 Adrian later reappears in the third alternate dimension after the fall of The Supreme King with his left arm imbued with a portion of Yubel's power. Intending to become the dimension's king he sacrifices Echo, to free the spirit of "Exodia the Forbidden One" from imprisonment and make it his servant, defeating Aster Phoenix in the process. He meets up with Jesse who is now possessed by Yubel in the latter's castle to prove that he is worthy of being king. Adrian's new Exodia cards allow him to go toe-to-toe with Yubel, but he is eventually defeated, and dies because losing a Duel in that dimension results in death. During that the Duel he revealed that he intended to become the dimension's king with intent of ridding the world things such as poverty and suffering, which Yubel mocked him for. After losing he says "I'm sorry" to Echo (who is not actually there), right before he disappears he screams out Echo's name (in the dub he screams out that he is so sorry for his actions towards her).

Adrian is seen one more time prior to Jaden's Duel with Yubel when Jaden remembers all the people Yubel has wronged.

Although it is later revealed that everyone who died in that world was actually trapped in yet another alternate dimension, that Yubel created, Adrian is one of the few who does not return after Jaden's final Duel with Yubel; as well as Zane Truesdale, Bastion Misawa, and Jaden himself. Jaden and Zane later return to Duel Academy and Bastion chooses to remain in the alternate dimension with Tania and her friends. Adrian's fate remains unknown.

A poster for the WRGP lists one of its sponsors as the "Garam Motors Co., Ltd". [3]

In the Yu-Gi-Oh! GX manga, he is a student at the American Duel Academy along with the other Overseas Champions.

Adrian's "Cloud" Deck takes advantage of a unique set of abilities, including monster destruction via Fog Counters and effect damage. The Summoning speed of his monsters is strengthened by "Summon Cloud" and "Big Summon Cloud", which allow him to instantly call forth his "Cloudians" as long as they are in his hand. In desperation, he can also activate "Wonder Cloud", removing almost all his cards from play to draw more cards. His signature card, "Cloudian - Eye of the Typhoon", is capable of shifting the Battle positions of all his opponent's monsters the moment it strikes.

After making his reappearance in the third alternate dimension after The Supreme King is defeated, he plays an Exodia Deck, using the Exodia pieces he received from Yubel as part of their deal. If the initial strategy to gather pieces fails, he can also Summon "Exodius the Ultimate Forbidden Lord", allowing him to achieve the same results as the above strategy by gathering all the pieces in his Graveyard. As a backup strategy he can also try win using the combination of "Fog King", "Royal Sword", and "Fog Castle"; if that strategy also fails, his last move is to try and gather the five pieces of Exodia by the effect of "Fog Castle" and "Break the Seal". He also runs Spell and Trap Cards that can recover the pieces from the Graveyard, such as "A Feather of the Phoenix" and "Backup Soldier" to quickly gather the Forbidden Pieces once again.