Priest Akhenaden and Bakura, King of Thieves faced each other in a Diaha at the Shrine of Wedju, in the Yu-Gi-Oh! manga. A similar version of this battle takes place in the anime.

As part of his crusade to collect the Millennium Items, Bakura targeted Akhenaden, but rather than kill him and take his Millennium Eye, he decided to corrupt Akhenaden with evil, in revenge for the Kul Elna massacre. 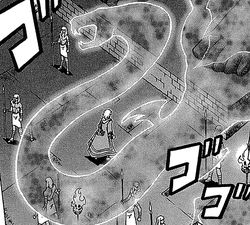 Having acquired the Millennium Ring from his battle with Mahado, Bakura's ka, Diabound gained the ability to blend into its surroundings. Hiding under the cover of Diabound's camouflaged snake appendage, Bakura walked past the security outside the pharaoh's palace and made his way to the Shrine of Wedju.[1]

Inside the shrine, Bakura confronted Akhenaden, revealing he had survived the battle with Mahado and taken the ring and reiterated his intentions to take the other Millennium Items.[1]

Akhenaden attempted to summon a dragon from one of the tablets in the shrine, but Diabound, camouflaged against the walls, smashed the tablet before the ka could materialize. Bakura warned Akhenaden that Diabound could tear the temple apart, before he would be able to summon a single ka.[1] 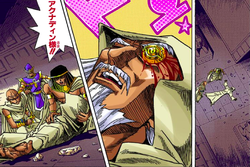 Akhenaden, after Bakura tampered with the Millennium Eye

Akhenaden refused to become Bakura's pawn and attempted to summon another ka. As it began to materialize, Diabound easily destroyed it.[2]

Bakura felt killing Akhenaden would not be sufficient enough to make up for the Kul Elna massacre he conducted. Bakura identified himself as the sole survivor of the massacre. As revenge, he decided he would have Akhenaden spill the blood of his own kingdom, as the ruler of shadows. Bakura tampered with the Millennium Eye, infusing it with his evil and bloodying Akhenaden's eye socket in the process.[2]

Bakura fled the shrine, leaving Akhenaden's unconscious body behind. Bakura was spotted leaving the palace, prompting another battle between him, Atem and the High Priests. Kalim, Shada and Seto tended to Akhenaden's body. Seeing his bloodied eye socket, they assumed Bakura had attempted to steal the Millennium Eye, but left without it.[2]