Aki (アキ Aki)[1] is a student at the Heartland Academy in Yu-Gi-Oh! ZEXAL. 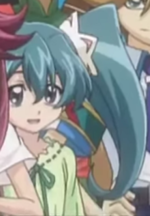 Aki as she appears in "Challenge the GAME".

Aki is a fair-skinned girl with dark grayish-blue eyes, and long dull cyan hair with three thick bangs and twintails, the latter held by white crown-shaped hairpieces with pinkish accents.

She is usually seen with the first-year female uniform. In "Soul Drive" (episode 57 onwards) and "Challenge the GAME", she is depicted wearing a light green loose dress and frilly skirt.

Aki is occasionally seen around the academy, often in company of Asuka and Yuki.

Shortly after the end of the World Duel Carnival preliminaries, the trio was discussing about how two of their schoolmates qualified for the finals while walking to the academy. Yuki commented that Reginald Kastle was a given, but the other was unexpected (in the dub, she says "and that really clumsy kid too" instead). Asuka agreed, before wondering what was his name again, stating that he had a catchphrase (in the dub, she did remember the name, and asked what the catchphrase was). All three pondered about it for a moment (the dub cuts this part, instead interrupting Asuka as she's about to try to guess), just before Yuma suddenly jumped from the top the stairs the trio was descending, yelling "Kattobing!" (in the dub, "Watch out 'cause I'm feeling the flow!"), lost his balance, and painfully landed face-first just behind the girls, startling them. However, he immediately got up, holding a pen, and asked them if they wanted an autograph, before he ran off proposing it to the other students nearby.[2]

Aki was part of the five-student group that was single-handedly defeated by Devon Knox during his visit to the school, along with Bronk Stone and three other boys.[1]

Aki has been shown to use "Madolche Chateau".