Born with psychic abilities, Akiza was eventually rejected by society, becoming a pariah known as the Black Rose Witch (の, Kurobara no Majo). Over time, Akiza embraces her role as a Signer and joins the others to protect New Domino City. 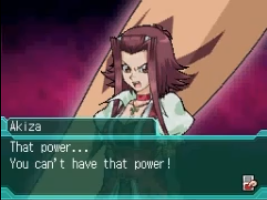 Akiza disgusted at the player having a Mark of the Dragon.

The player along with Leo and Luna visited the Underground Duel Arena in order to find the Witch, a person who was rumored to cause destruction and pain during her Duels. Upon arriving in the arena, the twins questioned the witch's personality but are interrupted by a piercing scream of a man, followed by the roar of a dragon. The crowds spectating the Duel screamed as Akiza approached the Duelist she defeated, but she was intercepted by the player. Upon approaching her, a sharp jolt shot through the player's head, returning some more of their lost memories. Akiza questioned what the player was hiding under their hand, and upon seeing their Mark of the Dragon, she becomes enraged, challenging the player to a Duel. After being defeated, Akiza silently left the arena. 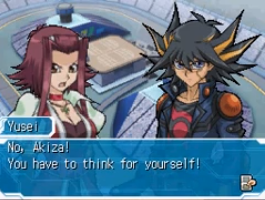 Yusei implores Akiza to think for herself.

The player is introduced to Akiza by Sayer shortly before she entered the Fortune Cup. Sayer requested that the player along with Okita and Liquid infiltrate location of the tournament to support Akiza. During the tournament, Yusei Fudo implored Akiza to think for herself shortly before defeating her with his "Stardust Dragon". After her defeat, Akiza was escorted from the tournament by Sayer, who complimented her on doing a good job and suggested they return home for her to rest. They are however intercepted by Lazar along with two of his henchmen who requested Akiza come with them to talk to Rex Goodwin. Wanting to return to the Arcadia Movement building, Sayer enlisted the help of the player, Okita and Liquid to prevent them from getting to Akiza. 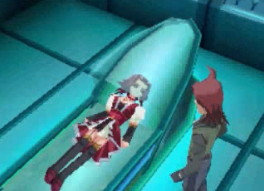 Akiza questions Sayer on what Yusei told her.

Upon returning to the Arcadia Movement, Sayer placed Akiza into a regenerative state where she questioned Sayer on what Yusei told her during the Fortune Cup. Annoyed, Sayer stated that Yusei spoke nothing but nonsense and that Akiza only had to listen to what he says. To sharpen up Akiza's Dueling, Sayer requested the help of the player. Upon entering Sayer's office, he insisted that Akiza go all out with her abilities and to think of it as training. Akiza thanked the player for agreeing to Duel. When the Duel concluded, Akiza's abilities threw the player into a wall, revealing that she still couldn't control them. Sayer then suggested that Akiza should go and rest. Before taking her leave, Akiza stopped and silently looked at the player before continuing to exit Sayer's office. 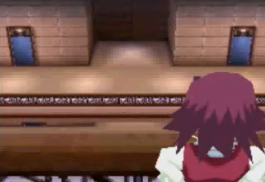 During an attempted escape from the Arcadia Movement, the player overheard Akiza talking to Misty Tredwell who accused Akiza of killing her brother. The two then began a Duel. After the player arrived at Akiza's location, they witnessed Misty insult Akiza for being nothing but a destructive and selfish witch. She then watched helplessly as Sayer fell from the floor above to his apparent death. Due to the destruction that "Earthbound Immortal Aslla piscu" caused, Misty postponed the Duel and left. Akiza and the player were then escorted from the building by Yusei. As Akiza was harmed during the assault, Yusei insisted that she visit a doctor. Due to the destruction of the Arcadia Movement building, Akiza and the player were left homeless, but Yusei suggested that they stay at Blister's apartment for the time being. Yusei later informed the player that the doctor said Akiza was fine. 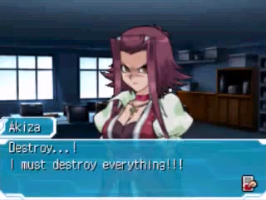 That night, several Shadow Drones infiltrated Blister's apartment, looking to Duel the player, Yusei and Akiza. Yusei held two off near the elevator whilst the player went to check on Akiza, but she had already been attacked by Jean, making her go into an enraged state. Upon defeating the Shadow Drone, he returned to his normal self and left the building. However, Akiza's abilities took over and she became enraged and challenged the player to a Duel, threatening to tear the world apart. After being defeated, Akiza returned to herself but upon realising that Sayer had died, she began doubting her existence and purpose. Yusei informed Akiza that the player and he are her friends, and that as a Signer, they will always have a bond. Akiza thanked Yusei and agreed to help him in the war against the Dark Signers. The three of them then agreed that it was late and went to sleep. 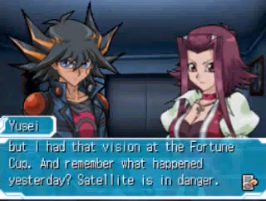 Akiza and Yusei discuss whether they can trust Goodwin.

The next day, Akiza thanked the player for preventing her from going down a path of destruction, gifting them a "Queen of Thorns" card. Akiza then questioned the player on why they were involved with the Arcadia Movement and was shocked to hear that they were brainwashed by Sayer, having no idea that he was responsible for doing such things. The conversation was cut short as Mina Simington arrived and requested the attendance of Yusei, Akiza to Rex Goodwin's mansion to discuss the matter of the Crimson Dragon and the Dark Signers. After Mina left, Akiza asked Yusei whether they could trust Goodwin, to which Yusei told her that although after everything he had done, he was the only one who knew what was going on.

Akiza later attends the meeting at Rex's mansion where he informed them that the Crimson Dragon was the one that guided their destinies to where they were. Akiza questioned Goodwin on whether it was her destiny to have the powers she hates and that have caused misery for both her and others, resulting in her becoming a pariah, to which Goodwin responds that without those abilities, none of them would have met. Rex informed them of the intentions of the Dark Signers which Akiza questioned him on how to stop them. She then became worried when Yusei insisted that he would defeat the Dark Signers and protect Satellite from being destroyed.

After arriving in Satellite, Akiza was visited by Misty who instructed her to come to the Ener-D control unit. Misty told Akiza that she wanted to Duel, not because she was a Dark Signer, but as a sister looking for revenge for the death of her brother. She then quickly left to look for Misty, worrying Yusei in the process. 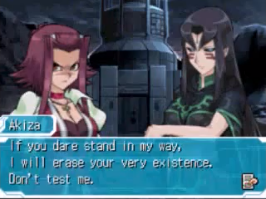 Upon arriving at the Ener-D control unit, that Misty was guarding, the player noticed that Akiza had become the Black Rose Witch again, enraging Misty in the process as Akiza had revealed her "true self". The player spotted Sayer, who informed the player that he had put Akiza under his control and that he was the one responsible for Misty's brother's death. After the player defeated Sayer, he ran off saying that as long as he had Akiza, he was fine. The player then chased Sayer and ran into Mina, who informed them that Akiza displayed her powers as normal until Sayer showed up, after which she became his puppet. Sayer then told Akiza to destroy Misty, which she agreed to. Misty overheard the player and Mina discussing what Sayer had done, realizing that he was the one responsible for her brother's death. Misty ordered her "Earthbound Immortal Ccarayhua" to consume Sayer, killing him. Realizing that Akiza was not responsible for her brother's death, Misty apologized to Akiza, stating that she had no reason to fight, but her "Earthbound Immortal" took control of her body. Sayer's death snapped Akiza from his control, but as she had no idea of what was occurring, the player stepped in, Dueling a controlled Misty in her place. 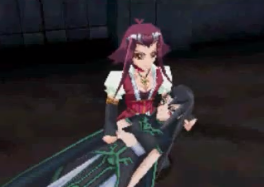 Akiza comforts Misty before her death.

Defeated, Misty snapped out of the control of the "Earthbound Immortal" and was comforted by Akiza. Before dying, Misty told Akiza to protect the world as a Signer, asking Akiza not to forget about her. Akiza then sealed the control unit with her "Black Rose Dragon". Exhausted from what had happened, Akiza was taken home by Mina. 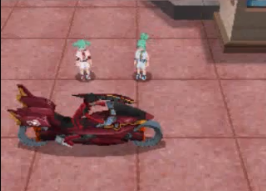 Akiza was later teleported to Rex Goodwin's mansion, where she watched the player Duel against Lazar. After the Duel, she was confused about why Lazar had Dueled the player and was shocked when a temple emerged from Goodwin's mansion. Yusei and Trudge then arrived, with Akiza informing them of what had happened. Akiza ran toward the temple, despite Mina's protests as she had promised Misty that she would protect the world as a Signer. After entering the courtyard, she wondered why the temple chose to surface and was shocked when Rex informed them that the world was doomed. After Rex informed the player, Yusei and Akiza that he was the one who summoned the King of the Netherworld, Akiza questioned Goodwin on why he did such a thing. When Rex embraced his condor birthmark, Akiza remarked that it was what happened to Misty. She then supported the player and Yusei during their Duels against Rex.

During the epilogue, it was revealed that Akiza had learned how to Turbo Duel, riding her Bloody Kiss Duel Runner. The player could later find her in the outer rim.

Changes - Preparing for the Tournament and a Looming Shadow[edit]

The player is introduced to Akiza by Crow Hogan, informing them that Akiza had just become a Turbo Duelist. They then decided to Turbo Duel to help Akiza get used to riding her Duel Runner. A few days later, Akiza arrived at the garage again, looking for an opponent to Turbo Duel against, but Misaki was busy tuning her Duel Runner. Akiza informed Misaki that Bruno was extremely helpful with projects like that, she then displayed annoyance at how Yusei had been spending more time with Bruno than with her lately. After the player enlists the help of Bruno, Yusei realised how much he had been ignoring Akiza and left to apologise to her.

To the Future - State of the WRGP and the World[edit] 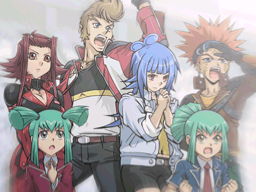 Akiza cheers on the player.

Akiza took part in the Battle Royal between the Diablo and the World Racing Grand Prix contestants. She later cheered on the player alongside Crow, Leo, Luna, Misaki and Toru during their Duel against Team New World. The player could later find her in the outer rim, alongside Tetsu Trudge.

The following cards can be obtained after defeating Akiza in Ground Duels.

The following cards can be obtained after defeating Akiza in Turbo Duels.

The following cards can be obtained after defeating Akiza in Ground Duels.

The following cards can be obtained after defeating Akiza in Single Turbo Duels.

The following cards can be obtained after defeating Akiza or Tetsu Trudge in Tag Turbo Duels.