From Yugipedia
(Redirected from Alcatraz)
Jump to: navigation, search 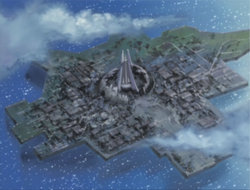 KaibaCorp Island, known as Alcatraz (アルカトラズ Arukatorazu) in the manga and Japanese version, is a location in the Yu-Gi-Oh! manga and anime. It is a small island owned by KaibaCorp, originally used as a military base while Gozaburo Kaiba was acting CEO, but became defunct when his adopted son Seto Kaiba ousted him from his position. It would later become host to a massive Duel Tower used for the Battle City Finals. At the end of the tournament, Seto destroyed the ruins of the old military base on the island in order to put his adoptive father behind him.

The location is named after the real-world island, Alcatraz, which was formerly used for military activity and later a maximum security prison, which has since been closed.