America Uchimura, known as Yonehito Uchimura in the Japanese version, is a Ra Yellow student. 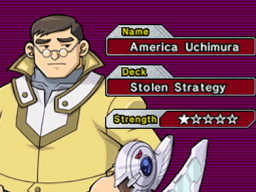 America appears as an opponent the player can face since the beginning of the game. He can be found around the Yellow Dorm.

America can give the player 1 copy of any of the following cards each time he is defeated.

Subject: I Have a Feeling...

I have a feeling that you're gonna be a huge name in dueling! I got a sixth sense about these things! I'm glad I was able to register you as a duelist before you got too famous for me!

I have the feeling you're going to be a spectacular duelist in the future! I'm really sure of it! I'm glad I could register you as a duelist while I had the chance!

I sense that you have excellent dueling potential! And my instincts say that you should also keep dueling me!

I feel tremendous potential in you as a duelist! My intuition tells me that I should continue dueling with you!

The name "America" is derived from reading the kanji for the given name Yonehito (米人) as the noun beijin, which translates to "american person".