From Yugipedia
(Redirected from Amnael)
Jump to: navigation, search
For other versions of this character, see Lyman Banner (disambiguation).

Lyman Banner, known in Japan as Daitokuji (大徳寺, Daitokuji) is a teacher, a fabled alchemist, as well as a member of the Shadow Riders under the name Amnael. Banner largely supports the protagonists for most of the first season of the series, though he is directly responsible for numerous events meant to orchestrate the revival of the Sacred Beasts. 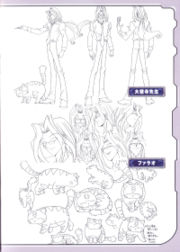 Banner's design incorporates a wide range of expressions. Depicted here is the professor and his cat Pharaoh in full regalia from front, side and rear alongside views of his head from different angles.

Banner's character design was overseen by Kenichi Hara. His usual outfit consists of a white shirt, black pants, belt and necktie. His black hair is tied back in a ponytail. Throughout the entire series, Banner's red eyes are constantly hidden behind their lids and a pair of square-lensed glasses, except during the second half of his Duel with Jaden.

The concept illustrations for Banner's facial expressions were identical for both Amnael and Banner.

In the dub, both Banner and his alter ego have Germanic accents (more obvious in Amnael's case). This is fitting, as many famous alchemists came from Germany.

In the original version, he often interjects the onomatopoeia nya (meow) into his sentences, referencing his attachment to Pharaoh. As Amnael, his voice becomes slightly deeper and more intense, no longer adding nya to his sentences, though his original manner of speaking returns after his defeat. 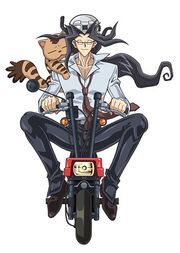 Banner riding a moped with Pharaoh

His personality appears to be that of a laid back, friendly, and caring teacher, often considered weird or goofy by his students but still highly respected. However he shows himself to be more focused and serious when it comes to personal matters.

Banner's personality varies greatly from his original Japanese in terms of his actions and intentions during the Duel with Jaden. In the dub, Banner lies about having rigged all of Jaden's Duels so that he would be chosen as one of the Spirit Key holders and later on confesses that he joined the Shadow Riders to prepare him for the final battle against Kagemaru. In the original, Banner never does this, but instead views Jaden as a "fusion genius" who must face adversity head on in order to learn the secrets of alchemy which have allowed him to triumph. 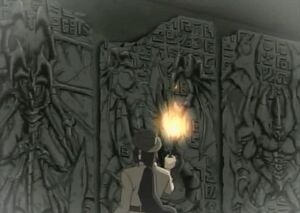 Discovery of the Sacred Beasts

Banner was working on his alchemic research long before his arrival at Duel Academy, intent on creating the legendary Philosopher's Stone. His studies led him to discover an ancient tomb during the same period of time when Pegasus first discovered Duel Monsters.

Within, he unearthed three stone tablets adorned with the likenesses of the Sacred Beasts, and would later be stricken with a fatal illness. (In the English dub, he was cursed for this intrusion.) To prolong his life, Banner developed a homunculus in his own image to transfer his soul into. 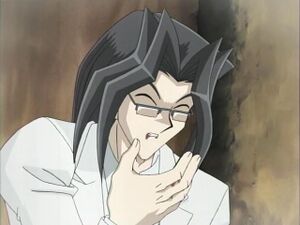 His new body however, began to crumble, so he resolved to join the Shadow Riders as its seventh and final member in order to attain the power of the Sacred Beasts to fulfill his dreams of creating the Philosopher's Stone and use it to obtain immortality.

Banner was eventually hired as an alchemy professor and head professor of the Slifer Red dormitory at Duel Academy. While there, he lured several Obelisk Blue students including Atticus Rhodes into the Abandoned Dorm, where they disappeared.

He would resume his job without coming under suspicion, ultimately charged with watching over Jaden Yuki, Syrus Truesdale, Chumley Huffington, as well as the rest of the students of Slifer Red. 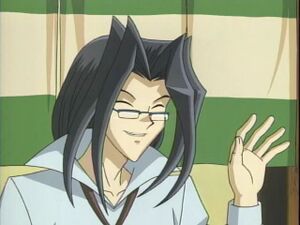 Banner, introducing himself to his new students

He was present at the welcoming dinner for Jaden and all of the new Red students that year, introducing himself as the head Professor. Later, he would appear and scare Jaden and his friends when they were telling scary stories late one night, revealing the existence of the Abandoned Dorm, lying to them about being hired after the students went missing. He would later be the official judge of the Duel between Chumley and his father, determining whether or not he would stay at Duel Academy. Throughout the first year he would attempt to teach alchemy to his students, often with disastrous albeit comical results.

One night Banner is shown talking to Kagemaru on a computer screen, long after the Reds are asleep, arguing with him that Jaden might not be ready for the Gravekeepers test. The following day Banner goes through with this plan, and takes Jaden, Syrus, Chumley and Alexis Rhodes as well as Pharaoh, who had invited himself hiding in Banner's bag, on a trip to the Gravekeeper Ruins.

Banner is shown in a cave at an unknown location with the other Shadow Riders, as Nightshroud voices he wants to make the first offensive. He is one of the seven Duelists that the Principal chooses to hold a Spirit Key. After the arrival of Camula, he is shown in his room performing a traditional Japanese ritual to exorcise ghosts. Throughout the various battles with the Riders, he remains distant and chooses not to partake in any of the Duels, and eventually goes missing, but not before Atticus remembers that he was the one who led him to the Abandoned Dorm. 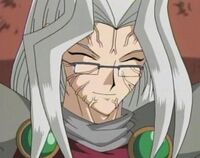 Using the pseudonym of Amnael (アムナエル, Amunaeru), Banner systematically defeats Atticus, Alexis Rhodes and Chazz Princeton taking their Spirit Keys to open the gate behind which the Sacred Beasts are sealed. He locks Alexis, Chazz and Atticus within his Shadow Charm, the Emerald Tablet and guides Jaden to his lair in the basement of the Abandoned Dorm with his sigil to challenge him to a Duel. Before Amnael's challenge, Jaden finds his original body, and believes he's the reason that Banner has gone missing. At one point in the Duel, Pharaoh runs up and begins acting friendly towards "Amnael", causing Syrus to worry that he's a dangerous person. At this point Amnael takes off his mask and reveals his true identity, shocking Jaden and the others. Eventually despite his good strategy, Jaden is able to defeat Banner. Upon his defeat, Banner gives Jaden his Shadow Charm and with it, "Sabatiel - The Philosopher's Stone". His original mummified body and homunculus vessel then dissolve into dust. From then on, his soul resides within the body of his pet cat, Pharaoh, who had swallowed his soul.

In episode 56, Banner briefly escaped from Pharaoh during the Duel between Bastion and Jaden, where he briefly exclaimed his freedom before being swallowed by Pharaoh again. He also briefly escaped during the Duel in episode 63 after Sartyr was unmasked, but only cried for help in the English dub before quickly being swallowed again. When Jaden was constructing his Deck for his fifth Duel against Chazz Princeton, he led Jaden to the Ojama Trio in Reject Well in order to construct his Ojama-HERO Deck. He then returned to Pharaoh.

When Yubel-possessed Marcel Bonaparte caused the Spirit Gates to open up, Banner appeared again to inform Jaden what was happening. Marcel, who was angry at Banner for revealing his plan, caused him to disappear back into Pharaoh. He then appears after Marcel starts running down the stairs to the Sacred Beasts, telling Jaden that the Sacred Beasts are very dangerous and that he must stop Marcel from obtaining them.

After the Yubel incident, he is still shown as a spirit, popping up out of Pharaoh's mouth from time to time, talking with Jaden, with Jaden asking if hes ever going to the afterlife. He is also briefly captured and threatened with being flushed down the toilet by Jaden if he doesn't tell Jaden about what really happened in the Abandoned Dorm with him and Kagemaru, and about Nightshroud.

Then, after Jaden defeated Nightshroud and Jaden's match against Yugi Muto in the past, he (inside of Pharaoh) is discovered inside Jaden's backpack. He decided to stay with Jaden rather than stay in Duel Academy.

Banner with Jaden and Yubel

In Yu-Gi-Oh! 3D Bonds Beyond Time, Banner's spirit and Pharaoh accompany Jaden during his search for Paradox. He and Yubel explain to Jaden that Yusei Fudo possesses special powers too. He is transported to the past and watches the Duel. Later he returns to his own time with Jaden.

As Amnael, Banner plays an Alchemy Deck, which draws a relationship between the science and universe. His strategy relies on the removal of his own cards from the game, supported by the Special Summoning of "Alchemy Beasts" (which was based off common base metals and animals used in alchemy to transmute and refine gold), and the Alchemic Processes (which was based off of four of the seven main stages in transmutation, falling under calcination, dissolution, separation, conjunction, fermentation, distillation and coagulation). After Banner removes enough cards from play, he would Summon "Golden Homunculus" which gains 300 ATK and DEF for each card removed from play. Banner also has the "Helios" cards as a contingency should "Golden Homunuculus" be vanquished.