Luna in the Ancient Forest.

The Ancient Forest is a location in the Duel Monsters Spirit World. The forest does not tolerate violence, as indicated by its card form. 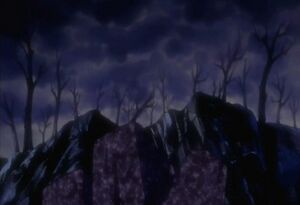 After she left, "Ido the Supreme Magical Force" came and infected the forest, while Zeman cast the Minus Curse on Ancient Fairy Dragon, sealing her in stone.

At the age of eleven, Luna returned to the Spirit's World again in the Ancient Forest, while she was Dueling Professor Frank at the Fortune Cup. Subconsciously Luna continued to Duel in the human world, while her conscious self lived the events of the Duel in the forest. Her own monsters assisted her as she battled "Ido" and Frank, who continued to pollute the forest. As Ancient Fairy Dragon proceeded to devour Frank, Luna forced the Duel into a DRAW to save Frank. This returned her and Frank to the human world.