Angie is a character appearing in the World Championship video games. She is always found in the Underground Duel Arena, with a different Tag Partner - and boyfriend - in each game.

Angie partners with Graton, and the player can accept her as a Tag Partner after dueling her 10 times.

Angie is now teamed up with Morrison. Defeating her 5 times unlocks her as a Tag Partner in Bootleg.

The player can accept Angie as a Tag Partner after beating her and Nelson in a Tag Duel 3 times.

After the player makes Angie their Tag Partner and exits Bootleg, they are stopped by Graton and Morrison, who challenge them to a Tag Duel. After defeating them, Angie tells them her actual boyfriend is at the Underground Duel Arena. Graton and Morrison decide to find and beat him, and Angie goes after them, worried for Nelson's safety.

The player and Angie find that Nelson is safe and sound, having beaten Graton and Morrison and getting them to promise not to stalk Angie anymore. Nelson notes that the player protected Angie, and rewards them with Hardened Armed Dragon as a token of gratitude.

Graton and Morrison cannot be faced in duels until after this event is carried out.

Angie uses a Dark Armed Synchro Cat Deck in the first game, and switches to Decks revolving around "Cosmo Queen" from the second game onwards. 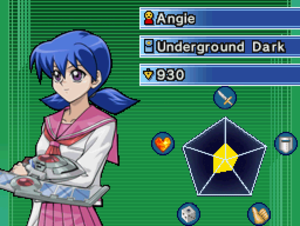 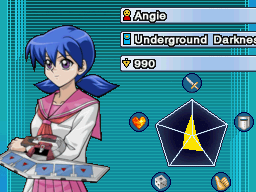