Anna Des ( Desu Anna),[2] also referred to as Ms. Guide (ガイドさん Gaido-san) to her displeasure, is a character in the Yu-Gi-Oh! OCG Structures manga. She works part-time at the Satellite Shop, and acts as the Head Judge for any tournament held within. 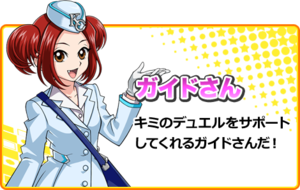 Des is a young woman, usually seen wearing her work uniform. Her overall design resembles that of "Tour Guide From the Underworld". She wears her red hair in pigtails, wears white gloves, and occasionally displays fangs when her mouth is open.

Des' Japanese name is written in Ateji, meaning her name uses kanji characters, but only for their pronunciation, without regard to their actual meaning. In addition, the ruby text in her name are spelled out with katakana characters rather than hiragana characters.

Her first name sounds similar to, and shares the first character with, the Japanese word 案内 (Annai, lit. "Guidance"); while her last name is a rendition of the English word "Death". When one reads her name in the Japanese order (Desu Anna) it then forms a reference to "Death Guide", the Japanese name of her card counterpart.

Des is a earnest, hard-working person, who almost always keeps a bright spirit. She is also generally helpful, whether it be helping a newcomer join an event, explaining difficult rulings to onlookers, or demonstrating any rule changes to the game personally. Des is also a notorious sore loser, ready to start crying at a moment's notice upon defeat and demanding rematches until she finally wins. She also has a reputation for not holding back against or going easy on anyone, children included.

Des, despite insisting that she's only a part-timer, has been working at the Satellite Shop long enough to have a reputation as a sort of Guide for the customers. She was present on Shoma Yusa's first day in Tokyo and his subsequent first visit to the Satellite Shop, where she helped him register for both a Duel ID and the Rising Rampage release event. She also introduced him to his then-rival and now-best friend Jukyu Goriki. Since then, she has been supporting Shoma from the sidelines as his circle of friends grew to include the Four Duel Kings, a local group of talented Duelists - Jukyu Goriki, Yami Kuroda Tsukiko Kuroda, and Saiko Tendo.

One night at the Satellite Shop, while cleaning up after an Adult's Night event for Duelists over the age of 25, she met a young woman who had come in too late for the event. Her manager Gob Lintaro, however, knew her, and introduced her as Ageha Yusa. Des recognized the name two-fold: first as the older sister of Shoma Yusa, and second as the legendary Traptrix Ageha, who had made it to the World Championships while only in middle school ans was a personal hero of hers. Ageha was invited by Gob to Duel with him, and after crushing him almost immediately, Des barged in and excitedly demanded a match as well. However, Ageha proved too much for her, and defeated her many times before (unbeknownst to Des) finally losing on purpose to stop Des' crying.

Des' first shown Deck is an "Adamancipator" Deck, which she uses against Shoma Yusa to demonstrate the Master Rule 2020 changes.

For the Team Battle event at the Satellite Shop, Des, as part of Team Structures with Shoma Yusa and Jukyu Goriki uses a "Darklord" Deck against "Light Tsukiko", the first member of Team Light and Darkness, the Two Sides of A Same Coin.