Anna Kaboom, known as Anna Kozuki (アンナ, Kōzuki Anna) in the Japanese version, is a character that appears in the Yu-Gi-Oh! ZEXAL anime. 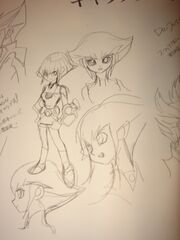 Anna has red hair, styled in a manner similar to Jaden Yuki's. Her usual attire is a pink and white shirt, which reaches below her waist, black compression shorts and a pair of boots in the same colors as her shirt. During the World Duel Carnival Finals, she initially wore a brown cloak over this outfit to hide her identity. 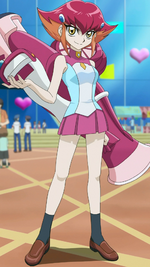 When she participated in the Couples Duel tournament, she stole and wore Tori's school uniform along with her brown shoes and socks. After the ceremonial Duel between Yuma and Astral, Anna was seen wearing her own first-year student Heartland Academy uniform.

When speaking in the Japanese version, Anna uses "ore" (俺) when referring to herself (supporting her tough girl attitude), a pronoun that is predominantly used by males and very seldom used by females (who are most likely tomboys in nature). Anna is also shown to be quite hotheaded and reckless, often rushing into things without thinking the situation through.

Astral calls her Dueling style very reckless (using up her entire hand in the second turn) but also very calculated (being able to push her opponent in a corner in only the third turn), which coincides with her personality.

Anna has also displayed a degree of selfishness, seen when she had difficulty working together with Yuma during the Couples Duel tournament, using his monsters to bring out her own (using his "Gogogo Golem" to Xyz Summon her ace card, as well as Tributing his "Gauntlet Launcher" with "Upgrade" to revive the aforementioned card). She was able to put aside her pride at the end of the Duel and activate "Devoted Love", knowing it would cause her to lose but give Yuma an opportunity for victory. 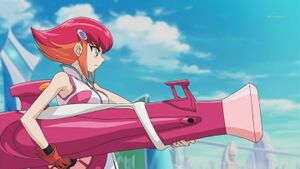 Anna carries a powerful cannon with her that can fire multiple shots at once.

This weapon can transform into a hovercraft, which Anna can use as transportation to get around, while still retaining its ability to fire. This is similar to the flight mode displayed by Paradox's Duel Runner. However, while flying, she often doesn't pay attention to where she's going, which led to her bumping her head on a light pole and a bridge on two separate instances.

The cannon is collapsible, able to be stored in a knapsack that can enlarge it to full size in a manner similar to how a parachute is activated.

Anna defending bullied kids. (This scene was not shown in the dub)

While in elementary school Anna was a tough girl who protected bullied children, in addition, she had a soft side and had a crush on "Yuma". Before she transferred schools, she wanted to confess her feelings to Yuma, but he never showed up due to how she constantly mistreated him. It is later revealed that the boy Anna actually had feelings for was a different boy with a similar name to Yuma's, Kumo Tsuyuma.[2] 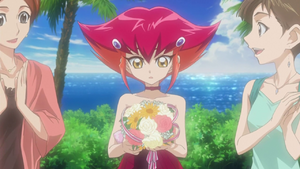 Anna was taught how to Duel by Brooke Walker. She promised Anna that if she could beat her, then she'd do what ever Anna wished.[3] She later attended the wedding of her friend and her husband, Mayday Walker, managing to catch the bouquet. Anna then looked in the bouquet to find the "Devoted Love" card, which Brooke said would assist Anna in finding her true love.[4]

Anna's first appearance, along with her cannon.

On the morning of the World Duel Carnival, Anna arrived in Heartland City via the train line. She was later seen observing the introduction to the tournament alongside Duelists such as Charlie McCay, Quattro and Reginald Kastle.[5] 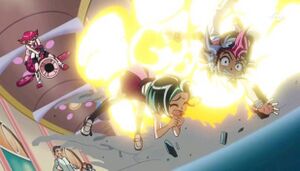 Later that day, Anna assaulted Yuma and Tori with her flying cannon, but continuously missed due to their swift tactics, despite doing it several times. When Anna finally managed to corner the duo, she fell off of her cannon and Yuma suggested that they Duel instead; if Anna won, then Yuma would become her boyfriend. Despite Anna's reckless and brute tactics through cards such as "Rocket Arrow Express" and "Superdreadnought Rail Cannon", Yuma managed to defeat her with his new Xyz Monster, "Temtempo the Percussion Djinn". After the Duel, Tori revealed to Anna that Yuma isn't the boy she was after, it was Kumo Tsuyuma. Since Anna did not officially enter the tournament, she could not give Yuma a Heart Piece for winning the Duel, therefore she just flew off on her flying launcher in anger. However, in the end she did develop feelings for him, first loving, then hating him after hitting her head while thinking about him.[2]

Anna hidden under a cloak.

Anna ambushed and tied up one of the WDC finalists and concealed her identity under a cloak, entering the finals in that person's place in an effort to meet with Yuma again.[6] She then got onto one of the Duel Coaster carts and sped off with the other finalists, leaving Yuma behind.[7]

Anna on the Duel Coaster.

Later on Anna arrived to save Yuma when the Triad of Terror gang up on him and managed to protect him at first. However, the Triad's various team formations cornered her as well up to the point of defeat if it hadn't been for the appearance of Nistro who evened out the battlefield. After Yuma defeated Coyote, Anna and Nistro helped him defeat Jackal by allowing him to Summon "One-Eyed Skill Gainer". However after this, Wolfsbane tried to defeat Yuma with a direct attack which Anna intercepted, causing her to lose the Duel and fall off of the Duel Coaster. She was rescued by her flying launcher, however. Her sacrifice enabled Yuma to defeat Wolf. She wished him good luck in the finals and flew off.[6]

Anna and Yuma vs. Brooke and Mayday.

During a festival hosted at Heartland Academy, Anna blasted a hole into the Monster Cafe held by Yuma and his friends, annoying Tori. Anna then laughed at Yuma's cosplay of "Temtempo the Percussion Djinn". Ray Shadows then burst into the room to inform Yuma that Brooke and Mayday Walker, a professional Tag-Team were entering the tournament and that Brooke would retire after that. Upon hearing this, Anna threatened Ray to see if he was telling the truth. Despite wanting to enter, Jen and Summer informed Anna that only students at the school could Duel against the pair. Upon hearing this, Anna stole Tori's school uniform in order to pass as a student at the school. She then forced Yuma to be her tag partner with her cannon. As the Duel began, Anna and Yuma began bickering, which greatly affected their Dueling performance, resulting in the destruction of Anna's "Superdreadnought Rail Cannon" as well as having to face off against the pair's "Skypalace Gangaridai".[4] As the Duel continued, Anna's selfishness continued to diminish any attempt at teamwork such as Tributing Yuma's "Gauntlet Launcher" via "Upgrade" to revive her "Gustav Max", which was later destroyed again by Brooke's "Chaos Xyz", "CXyz Skypalace Babylon". Despite this, Yuma saved Anna, taking a large amount of damage in doing so. This made Anna realize what Brooke meant with the "Devoted Love" card, which Anna used later on, allowing Yuma the chance to Xyz Summon "Number C39: Utopia Ray V", winning them the Duel. Afterwards, Brooke told Anna that the reason she's quitting Dueling is because she's pregnant (in the dub, she retired to become a teacher). She then encouraged Anna to be Yuma's girlfriend and pushed her towards him, calling it a "direct attack" which accidentally caused the pair to fall down a flight of stairs.[3]

Mizar vs. Anna and Nelson.

After Mr. Heartland was defeated, the Seven Barian Emperors arrived together on Earth in front of Yuma. Together, they Barian Battlemorphed. Yuma was then rendered unable to Duel when the Emperor's Key reacted with Nash's Barian Emblem. Subsequently, Roku and Kaze arrived and pelted the Emperors with smoke bombs, allowing Yuma's group to escape. The Emperors gave chase and Anna arrived, assaulting Mizar with her cannon. He blocked the blow, with Anna telling him she won't let him lay a finger on Yuma no matter what. Mizar responded that he won't forgive anyone that gets in his way. Anna claimed that unforgiveness was her line, but was interpreted by another figure saying the same thing. It was Nelson Andrews still acting in his Star Sparrow persona, saying it was time for another "grand feast of justice". The two joined together to confront Mizar. Later in the Duel, Mizar performed a Chaos Draw alongside the other Emperors.[8] He used "Rank-Up-Magic - The Seventh One" to bring out "Number C107: Neo Galaxy-Eyes Tachyon Dragon". Anna told him to bring it on, saying she'd protect Yuma no matter what. The dragon defeated both her and Nelson and she expressed disdain for her inability to protect Yuma as their souls departed for Barian World.[9]

Anna was revived after Nash was defeated by Yuma, appearing on the same spot where she and Nelson were defeated by Mizar. She flew on her cannon alongside Nelson to greet Yuma. Anna flew to Yuma's house to offer her support in the ceremonial Duel alongside her friends, but she accidentally created a hole in Yuma's bedroom wall with her cannon. She watched the ceremonial Duel between Yuma and Astral.[10] Later, Anna enrolled in Heartland Academy as a first-year student.[11]

Anna uses a Train Deck[2] primarily focused on Xyz Summoning her "Superdreadnought Rail Cannon Gustav Max". As that card is Rank 10, Anna utilizes several cards to easily access it such as "Night Express Knight" and "Southern Stars". She also supports it with cards such as "Train Connection" and "Upgrade". Anna's Dueling tactics have been described by Astral as reckless but calculated.[2]