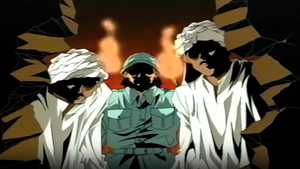 The archaeological team is a group that retrieved the Millennium Puzzle from the Valley of the Kings.

The Millennium Puzzle was discovered at the beginning of the twentieth century by the team of British archaeologists, who retrieved it from a pharaoh's crypt in the Valley of the Kings. Each member of the team died a mysterious death, with the last one uttering "the Shadow Games" in his dying breath.[1] This story was recounted in the 1960s, when Sugoroku Mutou was about to enter the tomb to retrieve the puzzle himself,[2] and in the 1990s when he was telling Yugi the dark history of the puzzle.[1]

A team of three entered a pharaoh's tomb, relieved to find that plunderers had not yet raided it. They spotted the box containing the Millennium Puzzle and wondered if it was the Shadow Games. As the leader went to pick it up, he started to feel discomfort and dropped to his knees. As his team members came to his aid, he then dropped to the ground and said that the box contained the puzzle of darkness.[3]

Sugoroku Mutou claimed that the each member of the team died a mysterious death, with the last one uttering "Shadow Game".[3]