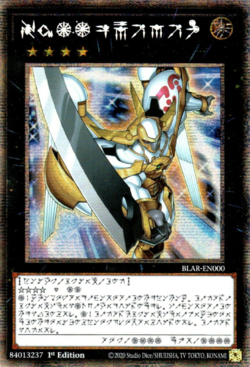 Astral glyphs (アストラル文字 Asutoraru Moji)[1] are the writing system used by those in Astral World in the Yu-Gi-Oh! ZEXAL anime.

The glyphs are a cipher of Japanese. For most glyphs, each corresponds to a single kana character, with the Astral glyph being a stylized version of the katakana character.

A special version of "Number 39: Utopia" written in Astral glyphs was released in Collection Pack 2020 and Battles of Legend: Armageddon.

Astral text is mostly a cipher of Japanese. Glyphs correspond to either a single kana character, decimal digit, symbol, or the key terms "Number" or "Number C". Attributes also have equivalent Astral glyphs, but these are used exclusively in the Attribute icon of cards (card text spells out Attributes using kana equivalents).

There is no Astral glyph equivalent of the chōonpu (ー); if the equivalent Japanese text contains one, it is replaced by the vowel it is extending.

Xyz Monsters' material has a unique syntax on cards written in Astral text. It is written as <☆ repeated a number of times equal to the monster's Rank> × <number of Xyz Materials, repeated that many times>. If the materials are required to be a specific Attribute, this is prepended by the required Attribute and a slash. For example, the material requirements for "Number C39: Utopia Ray" are written as: 「ヒカリ／☆☆☆☆ × ３３３」.

The labels "ATK" and "DEF" for the values on the bottom-right corner of Monster Cards are rendered as 「アタク」 Ataku and 「デフス」 Defusu respectively, which similarly to the English strings are abbreviated forms of the words Attack (アタック Atakku) and Defense (ディフェンス Difensu).

Card names that contain kanji are often abbreviated in Astral text. Kanji compounds in card names are often (but not universally) abbreviated to only the first kana of each kanji.

Each number is represented by a ten spoked wheel, with a dot outside. Counting the number of spokes clockwise from the top of the circle, until the dot is reached gives the number it represents.

Attribute glyphs are only used symbolically, in the Attribute icon of cards. In card text, Attributes are spelled out in the Astral glyph equivalent of kana.

The following cards have been shown in Astral glyphs.