Atem and Seto faced each other in a mock Diaha, in the Yu-Gi-Oh! manga.

Having witnessed Seto sacrifice his teammates to win a mock Diaha, Atem explained to Seto that a battle strategy relying on strength can reveal an unforeseen weakness and that true power would never mean hurting your friends. Seto asked what he considered power to be, in that case, and challenged him to a battle, in request for demonstration. Siamun Muran scolded Seto, accusing him of insulting the pharaoh, but Atem accepted. 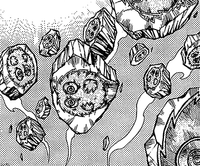 Kuriboh, appearing on each piece of the broken tablet

Seto looked forward to seeing the power of the gods, but Atem said he would not be using them. Seto claimed that Atem would not be able to defeat his spirit beast without them. Despite that, Atem asked that Seto not hold back.

Seto summoned his own ka, Duos. Atem choose to use Kuriboh, which began to appear in the tablet behind him. Seto felt insulted and attempted to destroy the tablet before Kuriboh could be summoned. Duos used its "Aura Crush" attack to shatter the tablet into pieces. However Kuriboh's special power caused a copy of itself to appear on each fragment of the broken tablet. Atem explained that if you attack without thinking, you lose.

A Kuriboh emerged from each piece of the tablet and covered Duos' arm, preventing it from using its sword. Atem told Seto that this was what he meant by power.