Atticus Rhodes, known as Fubuki Tenjoin (天上院吹雪, Tenjōin Fubuki) in the Japanese version, is a character in the Yu-Gi-Oh! GX manga.

Atticus has a reputation as a skilled Duelist; at Duel Academy, he and Zane Truesdale are referred to as the "Twin Gems" of the academy. He was originally the number one pupil the semester before his final year, but he felt that being first was "too much work". He is a star Duelist in the United States, where he is studying abroad at the American Duel Academy.

In the English version, Reggie MacKenzie refers to him as Rhodie; Atticus came up with this nickname himself, using it when he first introduced himself to Reggie. In the Japanese version, he goes by the moniker Fubu-king, a portmanteau of his Japanese name, Fubuki, and king.

He has previously defeated David Rabb, possibly during his time at the American Duel Academy, causing David to brutally defeat Alexis Rhodes in one turn during their Duel in the Academy Tournament finals. Atticus apparently developed an infatuation with Reggie MacKenzie while studying in America, and thus petitioned Chancellor Sheppard to allow him to stay abroad longer. However, he ended up returning earlier than he expected anyway, returning prior to Jaden's Tournament semi-final Duel against Chazz, as Reggie had ended up going to Duel Academy herself without informing Atticus. After having a conversation with Zane, he then decided to go look for her, but still watched the Duel on the television screens that are littered around the Academy's halls. 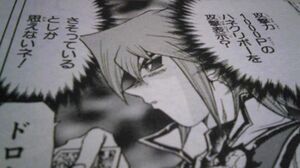 Atticus under the control of Tragoedia.

He is later confronted in the forest by Jim Crocodile Cook, who immediately challenged him to a Duel. Jim had been rivals with David Rabb and sought Atticus because the latter was able to defeat Rabb before he could. Despite Jim's use of the Legendary Planet "The Tyrant Neptune", Atticus won the Duel using his signature monster, "The Atmosphere".

He is later confronted by Aster Phoenix. Atticus, Zane and Aster used to compete in the Junior leagues together, but Aster was unable to defeat either of them at the time. Since then, Aster has become a professional Duelist, and he challenges Atticus, wanting revenge for his losses to Atticus when they were younger. Aster ultimately defeated him with his "Vison Heroes", though unknown to him, Tragoedia influenced Atticus and stopped him from activating his face-down card. Through this loss, Tragoedia is able to gain control of Atticus, and begins using him as an enforcer.

Tragoedia gives him the final card in the Legendary Planet series, "The Suppression Pluto". He uses this card against Jaden, and defeats him be using its effect. Afterwards, Tragoedia, through Atticus, takes Jaden's "Winged Kuriboh" and "Elemental Hero Terra Firma". Following this, Tragoedia stole energy from Atticus's body and took away "The Suppression Pluto", causing Atticus to fall into a coma from which he did not wake until Tragoedia was defeated.

Atticus plays a "Sphere" Deck, focused around swarming and equipping monsters on the opposing side of the field to gain an ATK boost, while sealing his opponent's ability to attack with cards such as "Air Sphere" and "Air Barrier".

Atticus was given "The Suppression Pluto" by Tragoedia when the latter possessed him after his loss to Aster Phoenix.[2][3]