From Yugipedia
Jump to: navigation, search
For the Tag Force version of this character, see Aura Sentia (Tag Force).

Aura Sentia, known as Mieru Houchun ( ミエル Hōchun Mieru) in the Japanese version, is a character in the Yu-Gi-Oh! ARC-V anime. She is a young fortune-teller, a student at the Fortune Prep School, and Zuzu Boyle's love rival. She later becomes infatuated with Yuya Sakaki after predicting her fortune of finding her fated person. 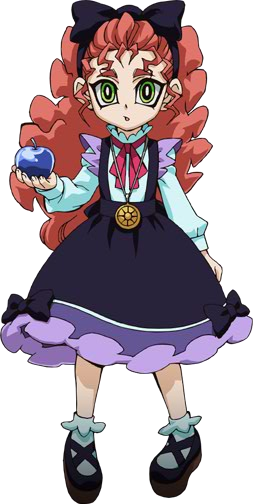 Aura is a fair-skinned young girl of low height with long curly red hair with a purple ribbon tied on top of her head and bright-green eyes. She wears a mostly purple flowing dress, and what appears to be a white blouse underneath, with a pink ribbon on her collar and a yellow coin-shaped pendant. She wears a pair of white socks and what appear to be brown sandals. Notably, she is always seen with a crystal apple.

Aura's time as a fortune teller has led her to believe that future events are pre-determined by destiny. During her fantasies of imagining who her destiny Duelist will be, Aura has been shown to be attracted to handsome men, up to the point that she gets nosebleeds just thinking about them. However, she was disappointed upon learning that Yuya was the destined person[3], but she fell for him after she was defeated, much to Zuzu's ire.[4] Her feelings for Yuya are such that she decided to forfeit her Arc League Championship Match after she heard that Yuya was unconscious.[2]

Aura refers to herself in the third person, using her name as a personal pronoun, a mannerism that shows cuteness in Japanese.

Aura is a fortuneteller and as such is able to read and predict the future. Although her predictions are not always definitive, she is able to foretell whether a person or herself will have a good fortune or tragedy, by using her deck as Tarot Cards, similar to Sartorius. Aura is also able to locate an individual as she could accurately determine Yuya's location at one time.

Hōchun is a pun on フォーチュン fōchun or "fortune", as the sounds "f" and "h" are very similar in Japanese. ミエル Mieru is pronounced identically to える mieru, "to see". Therefore her Japanese name "Hōchun Mieru" can be interpreted as "to see one's fortune", referring to Aura's character. As the kanji for her surname can also be read as "person" and "inside" via alternate pronunciations, another possible interpretation is "to see the person inside" or "to see inside a person".

Growing up, Aura used fortune-telling to predict all of her decisions, such as when she lost her way, on tests and even to predict the weather.[3]

While fortune telling, Aura read her future about her upcoming Duels to enter the Arc League Championship, predicting that she would win all six. However, when she turned a card over, it was revealed to be "Arcana Force VI - The Lovers", causing her to fall off of her chair in excitement, predicting that she would meet her fated person. She later awaited her opponent and fated person, who turned out to be Yuya Sakaki, who fell down the stairs leading to the Dueling chamber of the school. The way Yuya fell caused him to accidentally look up Aura's skirt, causing her to smash her crystal apple on his head, not only for that but also for his appearance of being her fated person. Angered, Aura questioned whether or not her fortune-telling was correct about Yuya being her fated person. They then began the Duel, with Aura reading all of Yuya's moves correctly through the use of coins, her Deck and the Action Cards scattered around the Action Field, also predicting that something bad would happen to Yuya if he didn't surrender the Duel. Yuya's constant misfortune lead to Aura successfully executing her Flip and Ritual Monster strategy.[3] As the Duel continued, Aura kept trying to convince Yuya to surrender to avoid being hurt, but he refused, almost being crushed by rubble from the Action Field as a result. However, he overcame this and defeated Aura with his newly gained "Rune-Eyes Pendulum Dragon", not only winning the Duel, but also Aura's heart, with her interrupting a conversation between Yuya and Zuzu to ask when she would meet Yuya's parents, angering Zuzu in the process.[4]

Aura appeared at the opening ceremonies to greet Yuya. However, when she found out he wasn't there, she used her crystal apple to attempt to locate her "darling," much to the displease of Zuzu who was being restrained by Frederick, Allie and Tate from angrily using her paper fan to smack Aura.[1]

Aura heard about Yuya's injury and rushed to his house to take care of him, setting up various occult-like measures to attempt to get him to recover. Zuzu and Yuya's mother, Yoko Sakaki, eventually suggested that Aura go to her Duel and see if that would wake Yuya up. Aura agreed, reaching the stadium just in time for her match against Moon Shadow, vowing to finish him off in two turns. Despite her vows, Moon Shadow defeated her with a One Turn Kill. She was overjoyed to see Yuya afterwards when he recovered, but he ignored her flying hug and attempted to talk to Shay.[2]

Displeased at the feeds being cut during the Battle Royal, Aura went to the Ancient Ruins Area looking for Yuya. After seeing Yuya in his Awakened state, she rushed to help him, but was stopped by Gong. Gong himself leaped up and rescued Yuya from a falling pillar, ordering Aura to get help. Gong, Reed Pepper and Trout later restrained Yuya in the Jungle Area after Aura brought the latter two to help her, while Aura used her crystal apple to see what was wrong with him. To her surprise, she found two souls in Yuya's heart, along with another darkness that was trying to consume both. When Yuya snapped out of the Awakened state, Aura and the rest of the group explained what had happened to him.[5]

After walking out in the Iceberg Area, Aura found Zuzu with Yugo. She didn't see Yugo's face. When Aura noted that Zuzu was dressed differently, she thought that Zuzu was cheating on Yuya. However, as her anger came on, she slid and fell into a chunk of ice, knocking her unconscious. Later, Reed and Trout found her and decided to bring her to safety, but they ended up on the Volcano Area where the Obelisk Force were Dueling against Celina, Moon Shadow and Shay. Reed and Trout decided to join the Duel, but Aura herself was not present.[6]

Aura was seen on Dennis' back, still unconscious where Dennis claimed that he had found her. Moments after the Arc League Championship, she regained consciousness and immediately found Celina with Yuya. She mistook Celina for Zuzu and thought she had been cheating on Yuya, but Celina cleared up the misunderstanding.[7]

Aura was present during Yuya's Duel against Declan, excited to see him Summon the "Rune-Eyes Pendulum Dragon" that he had used against her.[8] When Yuya lost most of his LP, Aura and Gong attempted to assist him, but Yuya waved them back, claiming that he had to win himself. She was saddened to see Yuya lose in the end.[9] Aura accompanied the Lancers back to LID Center Court, and when the crowd reacted angrily to Sylvio's presence, believing him to have gained re-entry into the tournament after losing, Aura quickly protested that she wasn't in the tournament, nor was she a Lancer. She later watched Yuya's Duel with Yoko Sakaki, and after he won, she predicted his future, declaring that he was going to travel.[10][11]

After Z-ARC's defeat and the Standard Dimension being reborn into the "Pendulum Dimension", Aura had lost her memories of Zuzu and the events involving people from other dimensions. She was present during the Battle Royal with Reed and Trout.[12] She is seen watching Yuya's Duel against Jack Atlas with Gong and Sylvio[13] and was happy when Yuya won. She then watched Yuya and Declan's Action Duel.[14] She was happy when Yuya won the Duel and witnessed Zuzu's revival.[15]