From Yugipedia
Jump to: navigation, search
For other versions of this character, see Axel Brodie (disambiguation).

Axel Brodie, known in Japan as Austin O'Brien is a student hailing from West Academy who enters Duel Academy in the third year. A battle-hardened and efficient mercenary, he is introduced as Thelonious Viper's right-hand man, but later joins with Jaden Yuki's group after escaping from the prison Viper placed him in when his usefulness had ended. 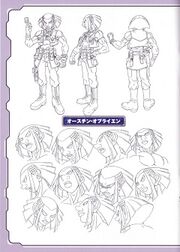 Unlike most students, Axel does not wear a school uniform, instead sporting a red tank top and black sleeveless vest and pants. He wears a gold pendant of unknown origin around his neck. He is one of the only characters of African descent in the franchise.

In the Japanese version, he occasionally speaks in English, and uses the word, 送達 (sōten, lit. "dispatch") when sending monsters to the Graveyard to activate the effects of his "Blaze Accelerator" cards.

In the dub, Axel speaks in a voice imitative of Eddie Murphy. The character he is named after, Axel Foley, was played by Murphy in the Beverly Hills Cop film franchise.

Axel wields a retractable Duel Disk resembling a gun which can be stored in a holster at his waist. The disk can function as an actual gun, albeit one that fires cards. In the past, he trained extensively with his father (a mercenary) on jungle terrain, learning the art of survival. During his time at West Academy, he adapted these skills to the performance of life-threatening wire stunts to master his drawing technique.

Unlike the other overseas champions, Axel and Thelonious Viper do not leave their cabins for the duration of the journey to Duel Academy. The two of them do, however, meet to discuss matters in private. Shortly after the beginning of the third year, Viper orders Axel to engage in a Survival Duel with Jaden Yuki. While Viper regards him as his "long-cherished hope," he does not care whether Axel claims victory or is defeated; his true interests lie in the realization of Jaden's full potential as a Duelist, so that his Bio-Bands may absorb all his Duel energy. Before Axel has the opportunity to confront him, he is approached by Syrus Truesdale, who he takes hostage in order to gain Jaden's cooperation. During the Duel, he is reminded of one of his father's teachings by Jaden's determination and spirit: although he is a "dog of battle," he must also protect his own life and be a passionate and burning warrior. He resolves to facing Jaden on his own terms, which Viper considers traitorous, but ultimately allows himself to be defeated in order to complete his mission.

Unsettled by the differences between the Survival Duels of West Academy and those taking place on the island, Axel searches Viper's hideout, discovering that he is operating out of the abandoned lab where Wheeler was trained. Arriving there moments after the Duel between Chazz Princeton and Adrian Gecko, he demands that Viper reveal his true intentions for coming to Duel Academy. When the man refuses and insults his father, Axel attacks him, but is locked in a pit for his insolence. He eventually escapes and assists Jaden and company in reaching Viper. He is later found alive after having seemingly been crushed under a facility door. 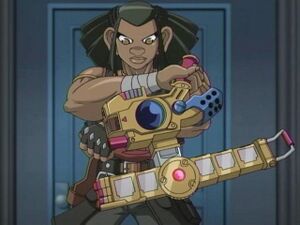 Axel joins Jaden and the others in a mission to rescue Jesse Anderson from the alternate dimension. After Jaden becomes The Supreme King, he and Jim Crocodile Cook team up to oppose him. Upon witnessing Jim's defeat, Axel is alarmed by the king's strength and lack of remorse, and runs away scared from the castle with the Eye of Orichalcum in tow. Deeply disturbed, Axel tries to hide from the king, but after encouragement from a village that resists him - as well as Jim's sacrifice - Axel defends the village from the Supreme King's Army and one of the Supreme King's lieutenants, thus becoming a local hero. He then teams up with Aster Phoenix, Zane Truesdale, and Syrus and assaults the king's castle, bypassing The Duelists of Death and challenging Jaden to a Duel. The Duel ends up as a stalemate, but Axel is able to lift the King's influence from Jaden with the Eye of Orichalcum at the cost of his own life.

He is later discovered to be alive, and held prisoner with everyone else who died in the Duel Monsters Spirit World in an alternate dimension by Yubel. He was returned to Duel Academy by Jaden after Jaden's and Yubel's souls fused.

At the beginning of the fourth season, he returns on a mission from Industrial Illusions, and saves Atticus Rhodes from Yusuke Fujiwara. He later gives Jaden information about Yusuke, telling him that Yusuke had been missing from Duel Academy. After Jaden's Duel with Atticus, he appears to help Jaden from Honest. He later investigates Domino City after its population begins to disappear under Trueman's attack. He later falls into a trap and Duels Trueman, but only to lose after succumbing to visions of a fire that his family was trapped in when he was a kid. Axel disappears and his parents forget that he ever existed. He is revived after Jaden defeats Nightshroud and was last seen at the graduation ceremony held at Duel Academy.

Axel appears in the Yu-Gi-Oh! GX manga along with the other Overseas Champions, although this time he is from the American Duel Academy.