Axel Brodie is a Legendary Duelist in Yu-Gi-Oh! Duel Links. This is a video game depiction of Axel Brodie, a character from the Yu-Gi-Oh! GX anime.

Red Gate Keys are required to Duel him at the Gate.

He appears in-game after the player reaches Stage 6 of Duel World (GX), at which point his Character Unlock Missions become available. Prior to May 21, 2021, he could only be unlocked through the special event D.D. Castle: Assault. Prior to his appearance as a playable character, he appeared as an opponent during the special event Axel Brodie is here!.

This transfer student from West Academy uses his expert survival skills to navigate all the new challenges at Duel Academy. As a first-class Duelist, Axel uses "Volcanic Doomfire" to burn everyone to a crisp with Effect Damage.

The following Decklists are used by Axel Brodie when encountered at the Gate or found roaming in Duel World. 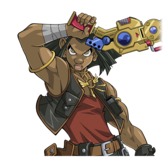