Axel Brodie, known in Japan as Austin O'Brien (オースチン・オブライエン, Ōsuchin Oburaien) in Japan, is a student at the American Duel Academy, who accompanies Principal MacKenzie to the main branch.

At one point in the past, Axel's father fell into a coma after losing a Shadow Duel. Axel enrolled in the American Duel Academy in response in an attempt to uncover the truth. There, many other Duelists fell unconscious and Axel began to suspect David Rabb of being the culprit.[2] Principal MacKenzie selected Axel as one of five students that would accompany him to the main branch of Duel Academy to participate in a tournament.[3] When they arrive, MacKenzie urges all of them to enjoy themselves.[4] Hearing of Chazz Princeton's Duel with David, after which David fell unconscious himself, Axel would seek out the footage from the Duel.[5]

The round of tournament matches consisted of Tag-Team Duels. Axel was selected to team with James Crocodile Cook against Chazz and Syrus Truesdale.[6] Though the two worked well together, they ultimately lost to the Japanese students.[7] The tournament moved to singles matches next, and Axel was selected to Duel Chazz. The Duel took place at the cliff. Axel asked Chazz what exactly happened during his Duel with David and also told him of his father's condition. Chazz agreed to reveal all he knew of the incident if Axel defeated him, as he was hesitant to trust him, but later determined that he was after the same thing that Chazz was - the truth.[2] 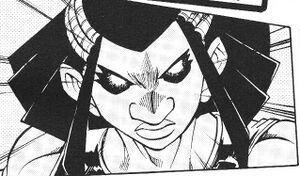 Axel taken over by Tragoedia

Chazz gained the advantage in the Duel, but Axel Summoned "The Blazing Mars", a Legendary Planet given to him by MacKenzie. Seeing darkness emanating from the monster, Chazz believed himself to be in another Shadow Duel. Tragoedia possessed Axel at this point, telling Chazz that it wasn't a Shadow Duel, but that the Duel must be finished.[8] Tragoedia reduced Chazz to 100 Life Points by Tributing four "Machine Tokens" with the effect of "Mars". His attack was stopped by "Durability (Dragon's Endurance)" and victory is lost when Chazz Summons the Feather of Ma'at—"Light and Darkness Dragon". Knowing that he is weak to it, Tragoedia left Axel to be defeated before the attack hits. Axel had no memory of what had just happened, only that he felt another presence in his body. When queried by Chazz, he cannot remember where he obtained "Mars" from in the first place.[9] Tragoedia took "Mars" back from Axel and rendered him unconscious when his usefulness was at an end.[10] Years later, Axel attended a Pro League event, where Jaden Yuki Dueled Koyo Hibiki.[11]

Axel plays an Electro Deck, focusing on militaristic Machine-Type monsters with electrical properties, as well as his Legendary Planet, "The Blazing Mars". His Deck includes several unnamed and unidentified cards.