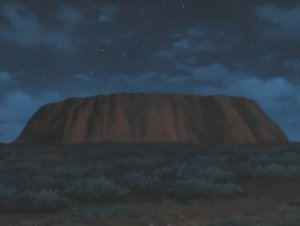 Ayers Rock is a large sacred rock in Australia. It appears in the Yu-Gi-Oh! GX anime.

In summer 2004 after failing his exams, Chumley Huffington, his father made him take a trip to Australia as part of his condition for giving up on Dueling. On top of Ayers Rock, Chumley decided to throw his Deck away, but became hesitant. He then witnessed a sunrise and realized his passion for Dueling and would do whatever it took to continue.

Ayers Rock came to have a special place in Chumley's heart. He designed and illustrated a card based on his experience at the location, and entered it in a card-design competition hosted by Industrial Illusions. He painted another picture of Ayers Rock in an art class at Duel Academy. During the class, he was called to the principals office to be notified that his entry had won the competition and been made into a real card, "Ayers Rock Sunrise". And that he was to be offered a job at an Industrial Illusions as a card designer, pending a recommendation for Duel Academy. Vellian Crowler objected to granting the recommendation, due to Chumley having failed his exams and insisted that Chumley must defeat him in the practical exam the next day to earn the recommendation.

Chumley used the "Ayers Rock Sunrise" card in the Duel against Crowler. Although he lost the Duel, Crowler was impressed by his performance and gave the recommendation.