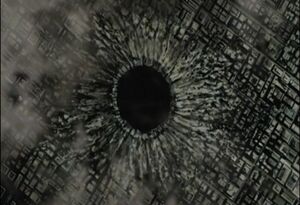 B.A.D., standing for Barbaric Area after Damage, was the most dangerous zone within the Satellite.

The first Ener-D reactor, which was then the Dark Signers' base and the gateway to the Underworld currently resided within the deepest part of the B.A.D. In the past, this area was very wealthy and productive. After the Zero Reverse incident occurred, a large crater was left in the middle where the ruins of the old Ener-D remained. The entire sector was leveled and eventually was separated by Sector Security in accordance with Rex Goodwin's orders. The security forces could not enter the area due to direct orders given from Goodwin so they abandoned the area, which in turn made it a popular place for people with an Criminal mark wanting to avoid Security.

Sometime later, the Dark Signers not only made it their home, but also unleashed a fog out of the area which absorbed most people in the Satellite (Martha and a few others were safe, as the fog didn't reach their place). Thus, they were able to establish themselves as the main power in B.A.D. in addition to serving as the guardians of the Ener-D reactor, which then served as the doorway to the Underworld.

In the World Racing Grand Prix Final, Aporia damaged the circuit during the final round, which caused him and Yusei Fudo to continue their Turbo Duel on the streets. Fearing for the safety of the civilians, Yusei drove to the old B.A.D. area, which was devoid of people, to continue the Duel.[1]