Baby Dragon was the first monster Joey Wheeler acquired in the World of Capsule Monsters.[1] 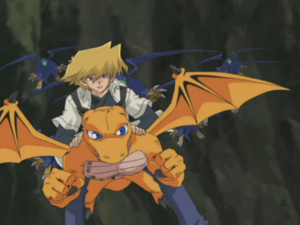 Joey Wheeler jumped from a ledge jutting out of a cliff to escape from a flock of Kurama. In doing so, he landed on a branch, which Baby Dragon's capsule rested on. The branch tilted under Joey's weight, causing the capsule to roll towards him, knocking him off. In desperation, Joey clasped onto the capsule as he fell. This released Baby Dragon, who saved him from hitting the ground.[1]

Baby Dragon and Joey went to a cave behind a waterfall. There Joey found a chest, which he was optimistic contained treasure. On opening it, Yamatano Dragon Scroll emerged and wrapped him up. Joey pleaded with Baby Dragon to help, but changed his mind when he saw that Baby Dragon was about to use a fire attack. Baby Dragon incinerated the scroll, but also burned Joey, who ran to the waterfall to cool down.[1]

Baby Dragon continued to fly Joey around until they saw a campfire. As they flew closer to the campsite, Joey recognized his friends Yugi Muto, Téa Gardner, Tristan Taylor and Solomon Muto. Joey fell from Baby Dragon as he tried calling them, but Baby Dragon was able to swoop down in time to catch him. Baby Dragon was returned to its capsule shortly afterwards.[2]

When a pack of Flower Wolves surrounded Joey and his friends, Joey Summoned Baby Dragon to help fight them off. Baby Dragon, aided by Thunder Kid and Celtic Guardian fought off a few wolves before it became clear they were too greatly outnumbered and the group opted to make a distraction and flee instead.[2]

When Joey and his friends were attacked by a group of The Wandering Doomed and Wood Remains, Baby Dragon was summoned and fought a number of them off.[3]

Joey attempted to get past the walls surrounding the Fortress of Fear by flying over them on Baby Dragon. However they hit a force field, causing both Joey and Baby Dragon to fall back. Baby Dragon returned to its capsule, due to the injuries it sustained.[3]