Barbara, also called Barb for short in the dub, is a resident from Crash Town. She is a secondary antagonist.

Barbara sent a letter to Yusei Fudo, requesting that he save his former friend Kalin Kessler. As Yusei arrived in Crash Town, he was challenged to a Duel by three individuals. Barbara, however, stopped the Duel - stating that such a Duel was prohibited by the town's rules (in the dub, she states that it was not the time for Yusei to Duel). She then revealed to Yusei that she sent the letter requesting his help.

Outside, Barbara began to explain to him about the town's horrific settlement. As they both observed as the sun is setting down, two rival gangs confronted each other, one belonging to Malcolm, and the other belonging to Radley. Barbara stated that when the sun sets the two gangs officially Duel.

Yusei then noticed Kalin looking and acting different, to which that Barbara explains the reason for her wanting for Yusei was to save Kalin, as he came to the town to die.

Yusei then learned that those who lost a Duel in the town were forced to work in a mountain forever. Barbara then stated that in order for Yusei to save his friend, he must defeat him in a Duel, since it was the only way to be released from Radley's group, at which time Yusei must take him back, before Kalin was taken into mountains.

After the Duel ended, Yusei and Kalin ended up being double-crossed by Barbara, who actually was, in secret, a member of Malcolm's gang. Later, after Lawton's Turbo Duel with Yusei, Barbara changed loyalties again, and sided with Lawton, double-crossing Malcolm as well. (In the dub, Barb is Lawton's wife, and had planned this with him from the start.)

Later, with complete control over the town but not feeling they have enough workers in the mines, Barbara and Lawton began having their henchmen Duel for their safety. To their shock, Yusei and Kalin returned and challenged Lawton to a Duel for the town's future. When Lawton's defeat seemed certain, Barbara attempted to make Yusei and Kalin forfeit by making two children her hostages. Fortunately, Crow and Jack arrive to save the children and Jack, apparently thinking that Barbara was undeserving of chivalry, punched her. Shortly afterward, Sector Security arrived and started rounding up Lawton and Barbara's men. Hoping to escape with Lawton, Barbara soon received a taste of karma when Lawton showed himself even more self-serving than Barbara and betrayed her. In the end, Lawton and Barbara were taken into custody. 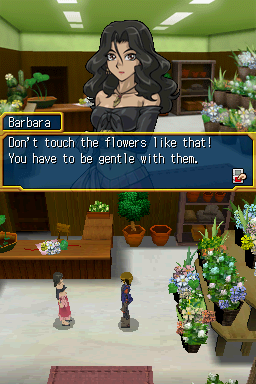 Barbara after the event.

Barbara appears in Yu-Gi-Oh! 5D's World Championship 2011: Over the Nexus and plays a similar but smaller role to her anime counterpart, and she is ultimately not arrested. She can be dueled inside her flower shop after the events of Chapter 5. 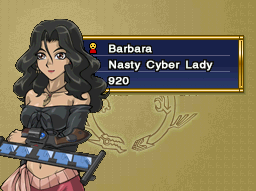