The Barian Emblem is the emblem symbolizing the Barian World and its residents. Its origins lie in the past life of Nash, leader of the Seven Barian Emperors in which he wore it as a pendant[1]. It appears as a stylized blue fleur-de-lis with a cross-section that encloses a red diamond-shaped gem at center. 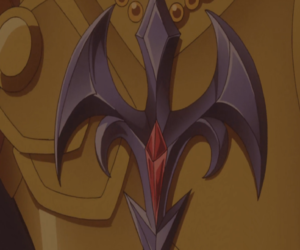 After Nash's death in his past life, he was reincarnated as a Barian and was chosen as the Barian leader by the denizens of Barian World. Due to this, his emblem came to symbolize the Barian World and its residents. Each of the Seven Barian Emperors possess similar, though unrelated emblems. Those who are brainwashed by a Barian have this emblem appear on their foreheads and no longer require the need of their own Duel Gazers to see the augmented reality. One of their eyes just becomes red instead.[2] When Vector possessed Dr. Faker, the emblem appeared on his forehead.[3]

Also, all those who are brainwashed by the Barians have a tendency to say "Barian sekai no tame ni", meaning "for (the sake of) the Barian World". 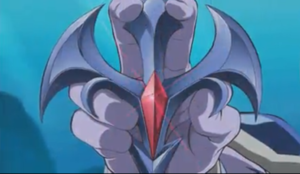 Close up of Barian Emblem, being held by Dumon.

The emblem is also known to hold past memories of Nash. Later on, Dumon presented it to Shark as it originally belonged to him. If it did belong to him, it would be certain to reveal the truth. He urged him to touch the Emblem and awaken his and Rio original memories from the ruins and remember his reasons for becoming the leader of the Barians.[4]

Don Thousand also has his own variation of the Barian Emblem. It has thus far been seen when he has used his powers in other ways such as healing Alito and Girag; resulting in them having a malicious disposition.[14][12]