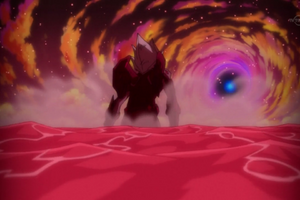 Vector crossing Barian Sea to get to center of Barian World.

The Barian Sea, known as the Sea of Ill Intent (悪意の海 Akui no Umi) in the Japanese version, is a sea which exists within the Barian World in Yu-Gi-Oh! ZEXAL.

This sea held Don Thousand prisoner as he had fought against Astral himself thousands of years ago and lost, who then sealed him in this location. Also within this sea is where Mr. Heartland ended up when he fell into the portal before Dr. Faker Dueled against Yuma, Shark and Kite.[1]

After the Battle of Sargasso ended, Vector swam through the sea, which burned his injured body even further, to the place where Don Thousand was sealed and released him. He offered Don Thousand his life in exchange for the power to defeat Yuma and Astral. Thousand told him to journey to the Human World and procure the seven sealed "Mythyrian Numbers", which would fully revive Don Thousand. Vector agreed and Thousand merged with him, empowering Vector with new abilities and restoring his severely wounded body.[1]