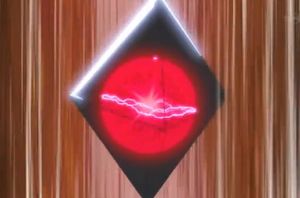 A Barian Sphere Cube, known as a Barian's Sphere Cube or Varian's Sphere Cube (バリアンズ・スフィア・キューブ Barianzu Sufia Kyūbu) in the Japanese version, is a device developed by the denizens of Barian World in the Yu-Gi-Oh! ZEXAL anime. They project a Sphere Field in order for the Barians to show their true original form as they cannot show it in a low-energy world such as Earth and thus must retain their human form. So far, five have been shown to exist and were all used by Mizar, Alito, Girag, and Vector. 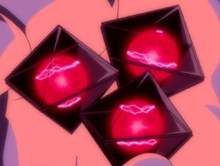 Three Barian Sphere Cubes before use.

When inactive, a Barian Sphere Cube appears in the form of an octahedron (contrary to its name) containing a mini red-colored Sphere Field pulsating with electricity. After activation, the octahedron bursts open and the Sphere Field enlarges.

The Sphere Cube grants the Barian race the ability to gather "Number" cards. When inside it, they may revert to their original Barian forms. Both of these actions are usually impossible when a Barian is on Earth, as they can only take human form there (however Vector was able to conjure an illusion looking as if he could maintain his true form on Earth without use of one). It is also shown when a person hits their back against the Sphere Field, they are shocked by it, as shown when Yuma was blown back when "Number 39: Utopia" was destroyed by "Number 107: Galaxy-Eyes Tachyon Dragon".

The device negatively affected Astral. After only a short time within the field, he was injured enough that he continued to fade in and out after the Duel ended, though his condition became normal over time.[1] If Astral stays in for too long, he becomes so injured that he becomes severely incapacitated.[2]

An item may exit the Sphere Field without getting damaged. This is shown in the Duel between Yuma, Ray and Girag, when the Emperor's Key was thrown out the Field by Yuma.[3] Sphere Fields generated by a Barian Sphere Cube cannot contain much energy, as the cube will become very unstable, as shown when Mizar's "Number C107: Neo Galaxy-Eyes Tachyon Dragon" began to overload it.[4] Also, unlike Dr. Faker's Sphere Field, which harvested all "Numbers" from both players at a Duel's end, a Sphere Cube seems unable to capture the "Numbers" of the player who wins the Duel. They appear to be good for one use only. They also need a large space to be used properly; if one is activated in an environment that is too small, then the device will destroy part of the environment in order to fit.[5][2] Also it is possible to counter the effects using ZEXAL Field through ZEXAL III.[6]

The outside of the generated Sphere Field.

After Alito and Girag's constant failures, Dumon handed three of these devices to Mizar before the latter departed for Earth, telling him to give one to Girag and one to Alito. After he gave the two their Cubes, Mizar immediately makes use of his own, tracking down Yuma Tsukumo and beginning a Duel.[5]

The power of "Neo Galaxy-Eyes Tachyon Dragon" threatens to destroy the Sphere Cube.

During Girag's Battle Royal, he was about to defeat Yuma after wearing him down when Alito intervened, using "Lightning Clinch" and "Brain Reboot" to defeat all the remaining opponents. Girag was enraged by Alito's betrayal, but Alito told him that he wanted to Duel against Yuma fairly. After revealing his true nature as a Barian, Alito began his Duel with Yuma, with the former deploying his Barian Sphere Cube. The two battled as they had last time, with counter after counter, which excited Alito.[7]

As the Duel continued, Alito managed to Xyz Summon his own "Number", "Number 105: Battlin' Boxer Star Cestus". Yuma and Astral then united with the power of ZEXAL and Summoned "Number C39: Utopia Ray", forcing it to tie in battle with Alito's "Number", destroying both of them, to which both activated "Xyz Stand". Alito shed his human disguise, revealing his Barian form to Yuma and Astral. With the effect of "Rank-Up-Magic Barian's Force" he managed to Summon "Number C105: Battlin' Boxer Comet Cestus" which pushed Yuma into an even tighter corner. However thanks to ZEXAL and "ZW - Eagle Claw", Yuma was able to defeat Alito. After the Duel, Alito left using a portal but was viciously attacked at his and Girag's base by an unknown person, only to be found later on by Girag, injured. When Girag asked him who did that to him, he said only the name "Shadows".[8]

During Yuma's and Ray's Duel against Girag, Ray told Yuma that he was a member of "Barian's Guardians" and threw him "Rank-Up-Magic Limited Barian's Force". With it, Yuma Summoned "Number C39: Utopia Ray V", defeating Girag and destroying the Barian Sphere Field Cube.[2]

Vector's clone was shown to have at least two more Barian Sphere Cubes in his possession, which he used against Vector (as Ray) and later Yuma.[9]

After receiving and adjusting to the power of Chaos, Number 96 obtained the ability to create a Sphere Field without the aid of a Barian Sphere Cube. The sphere dissolved when Number 96 activated "Chaos Field".[10][11]