From Yugipedia
Jump to: navigation, search
For the soundtrack, see Barian World (composition).

Barian World or Varian World (バリアン Barian Sekai),[1] is a dimension located in parallel world in the Yu-Gi-Oh! ZEXAL anime that is a counterpart of Astral World. It is ruled by the Seven Barian Emperors and its malicious deity and embodiment is Don Thousand.

Barian World was once part of Astral World and was created with the purpose of hosting any soul that possessed the power of Chaos.[2] The world was originally small, but later expanded due to all the souls that were caught in the middle of Nash's campaign against Vector.[3]

Barian World is a world made of various powerful energies resembling Astral World, but with a reversed color scheme. Like the Earth, Barian World experiences rainstorms on occasion. Unlike Earth, Baria Crystals occupy most of Barian World, as do red tundras.

Thousands of years in the past, Don Thousand confronted Astral in battle and was defeated, but not before a shard of his essence was stuck to him. Astral then sealed him within the Barian Sea.[4][5] 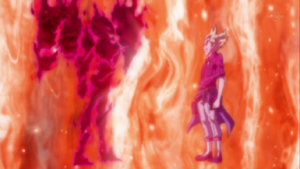 When Dr. Faker entered Barian World by sacrificing two people - Kazuma Tsukumo and Byron Arclight,[6] he was met by Vector. Vector agreed to use the powers of his world to sustain the life of Faker's son Hart Tenjo. In exchange, Faker was to destroy Astral World. To that end, he began gathering "Numbers" to power the Sphere Field Cannon.[7] However, he told other people he made the pact with Vector in order to conquer the world.[8] Faker's son, Kite, owns a robot called Orbital 7, which was fueled by Baria Crystal, a fuel source from Barian World.[9] Although Faker did not tell Kite the whole story,[7] he was at least aware that Barian World existed and was related to the "Numbers" in some way.[9] 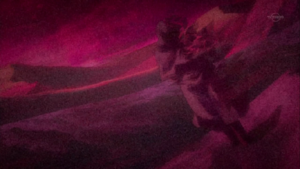 Vetrix wandering in this world.

Byron Arclight (who eventually became known as Vetrix), was rescued by a group of Barians and granted the abilities of Barian World. His saviors requested that he collect the "Numbers" and destroy Astral World as compensation for their help.[10] These abilities included the power to restrain opponents with chains,[11] and ownership of the card, "Final Prophecy", which is capable of opening the doorway to Barian World.[12] Vetrix said that he trusted only two things - himself and Barian World, as they are what protected him after being betrayed by Dr. Faker.[11] 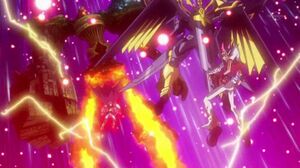 Yuma and Trey Duel in the gateway to the Barian World.

Vetrix gave "Final Prophecy" to Trey, which was activated during Trey's Duel against Yuma Tsukumo. It caused the gateway to Barian World to appear, which threatened to destroy all of existence. However, Trey and Yuma cooperated to seal the gate.[12] 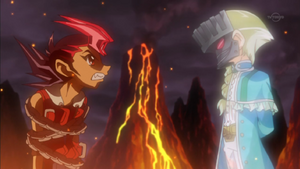 Vetrix chains Yuma with material from the Barian World.

In the semifinals of the World Duel Carnival, Vetrix used chains that came from Barian World on Yuma. He told Astral that his own powers would not be able to affect the material, as Astral's powers came from Astral World.[11]

After the constant failures of Girag and Alito, Dumon decided to send Mizar to Earth in order to Duel Yuma.[13] He gave Mizar three Barian Sphere Cubes, one for Mizar and two of which he was to give to Girag and Alito. He then disappeared into a portal and appeared in another realm, where he approached Galaxy-Eyes Tachyon Dragon, which he sealed in a blank card.[14] Following Alito's ambush by Ray, Mizar took him back to Barian World to recover from his wounds.[15] After Girag's defeat by Yuma and Ray, he was severely injured and forced to retreat to Barian World.[16] 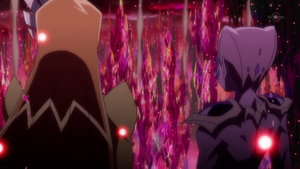 The Barian world begins to crumble.

Frustrated that his machination against Yuma and his allies was defeated, Vector dove into the Barian Sea to release the Barian deity, Don Thousand, who granted Vector his power in exchange for locating the seven "Mythyrian Number" cards that sealed him away long ago. At the same time, Barian World began to crumble, leaving Mizar and Dumon wonder if their world was ending. Vector appeared to them, telling them that they need to find the "Numbers" before Astral recovers his powers and destroys their world. Locating these Numbers with assistance from Mr. Heartland, who had been transformed into a fly by Vector after falling into Barian World, Vector used his power to revive Alito and Girag.[4]

Number 96's power returned to Don Thousand upon his defeat. Thousand proceeded to lead Vector to his palace. Thousand revealed four "Numbers" with great power to Vector, who wished to go crush Yuma with them immediately. Thousand insisted that it was not time yet.[5]

He revealed a device, capable of combining Barian World and Earth, if the malice of the human world reached that of Barian World. This would amplify his power one-thousand fold - enough to destroy Astral World. To do so, he needed to make more of those devices, which was where the power he regained from Number 96 would go. He instructed Vector to sit on the throne. When Vector did, Thousand fused Vector to it, rendering him immobile as the two needed to stay in the palace in order to put the power to work by building more devices.[5]

After Erazor's defeat at the hands of Yuma and Trey, Heartland reported the failure to Vector and apologized. Vector responded that he would tolerate no more failures. Heartland revealed he had the next assassin set up - Chironex, a WATER Duelist who once served as Heartland's own mentor. Upon hearing this, Vector ordered Heartland to send Chironex after Shark and mused that whenever he thinks of Shark, his chest fills with rage.[17] When Chironex was defeated, Scritch came to stop Yuma's journey to Astral World, but was defeated by Quinton and Kite, who managed to send Yuma to get Astral back.[18]

While Yuma journeyed through Astral World, he encountered Ena, who revealed that long ago, Barian World was once part of Astral World and that the same world was created with the purpose of hosting any soul that possessed the power of Chaos.[2]

During this time, Don Thousand and Vector initiated their machination, sending many "Fake Numbers" they mass produced to corrupt the populace of Earth, as they were to be sacrificed so that Barian World can be merged with Earth via the Fusionizer. When Yuma returned, he started a Duel with Mr. Heartland, who harmed Kite using the "Number" he obtained from Scritch. Mr. Heartland used his "Number 1" and transformed himself into a demonic humanoid, depleting Yuma's points rapidly. However, Yuma and Astral merged into ZEXAL III and defeated Mr. Heartland, causing the counterfeit "Numbers" Vector and Don Thousand created to be destroyed. However, Dumon managed to get Rio and Shark back as Nash and Marin, the two missing Emperors, turning them against Yuma, Astral and Kite.[19]

Barian World and Earth have shown a strong connection with each other. Several humans who have died on Earth, have been reincarnated as Barians, such as the military of the United Lands of the Poseidon Ocean, Iris, the Fearsome Four of the Dark Dueling World and the Seven Barian Emperors. Barians can reincarnate as humans, such as Nash and Marin, who were reincarnated as Reginald Kastle and Rio Kastle respectively.

Humans, who were reincarnated into Barians can acquire an alternate alien-like form and several superhuman abilities such as teleportation and energy blasts, among others which vary from each individual. According to Don Thousand, if the hatred of Earth is great enough, it is possible to fuse the Earth with Barian World, suggesting a malicious connection between the two worlds. Those who die with sorrow and resentment in their hearts go to this world.

Barian World was once at war with Astral World, it's been confirmed by Eliphas and Astral that Astral's mission is to destroy Barian World, while the Barians want to destroy Astral World in order to prevent that.

Both factions seek the "Number" cards, with the ultimate objective being the Numeron Code. Since the two worlds cannot interact directly, the Earth is exploited as their battlefield, with humans being recruited or coerced to assist in their cause.

However, through Kazuma and ultimately Yuma's efforts, Astral world began to consider abandoning the power of Chaos an error. This mistake is resolved once a changed Astral used the Numeron Code to fuse the two worlds back together, which brought up many new challenges for the world in the process.