Bashford, known as Tetsuzo Kuzuyama in the Japanese version is a hermit character in Yu-Gi-Oh! 5D's, living in Satellite.

Having once lived happily with his wife and Adam, his son, Bashford became obsessed with his work, prompting a separation. Afterwards he became socially withdrawn and developed compulsive hoarding.

His Japanese name and surname, Tetsuzo and Kuzuyama, can be directly translated as "Iron Warehouse" and "Scrap Mountain" respectively.

Bashford had a strong relationship with his son Adam, who he would often Duel with, and gave him his "Kid Junk" card. However, due to his obsession with his work, Bashford's wife eventually left him and took custody of Adam, leading Bashford to become a hermit afterwards. He allowed the amount of scrap-iron in the garden to go out of control and did not see his wife or son after their separation. He built an old-fashioned Duel Arena in the hopes that Adam would return to Duel him.

Martha and Schmidt became concerned over Bashford's safety, as he is living alone amongst unstable piles of scrap metal. Unable to convince him to move into Martha's place, they send Crow to speak with him.

After Crow, Yusei, Jack and Blister arrive outside Bashford's property, he attempts to shoo them away. Crow tries to forcefully enter his house, but Bashford fends him away with a series of traps (One of those traps looks like "Scrap-Iron Scarecrow") and a holographic "Two-Headed King Rex" from the Dueling Arena.

Crow challenges him to a Duel in the arena. If Bashford wins, Crow will leave and if Crow wins, Bashford will come with them to Martha's. Bashford reluctantly accepts. He uses a scrap metal family themed Deck; Both Yusei and Jack recognize the strategy, but are confused as to why he does not Summon the child card, which ultimate leads to his defeat. The shockwaves from the Duel cause the mountains of junk to fall over, destroying his house, but Crow manages to save Bashford by pulling him into a cabinet to shield them both.

Before the house collapses, Yusei managed to retrieve a picture of Bashford and his family. Yusei guesses that the reason Bashford did not Summon "Kid Junk" is because he gave it to his son.

Bashford tells them of how he lost contact with Adam due to his own neglect. Yusei, Jack, Blister and Crow tell him that they are his sons and convince him to come to Martha's where he will have plenty of grandchildren.

Bashford moves in to Martha's, where he makes a Stardust Dragon statue out of scrap metal in front of the house. He asks Crow to give him a shoulder massage as his new son. 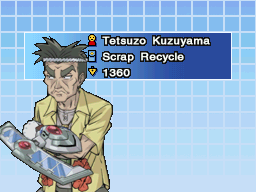 Bashford, in Reverse of Arcadia

Bashford can be found in the Satellite Slums after finishing the main storyline. He is referred to by his Japanese name, Tetsuzo Kuzuyama.

Bashford uses a Scrap-Iron Family Deck that revolves the use cards with the word "Junk" in their name. This, in combination with the Field Spell "Junk Factory", which besides powering them up, also makes monsters return to the owner's Deck instead of being sent to the Graveyard when they are destroyed. Additionally, his Trap Cards, much like "Scrap-Iron Scarecrow" are capable of being reused each turn, having the effect to Set themselves face-down instead of going to the Graveyard.