Bass is the pet tiger of Tania. He is a character version of the card "Amazoness Tiger".

His name is a pun based on the former Hanshin Tiger baseball player, Randy Bass.

When Jaden, Bastion and their friends enter Tania's coliseum, they are chased by Bass up a pillar. Tania then arrives and he returns to her side.

After Tania defeats Bastion, Bass chases the others out of the coliseum so that she and Bastion can begin their "honeymoon".

When Tania loses her Duel with Jaden and relinquishes her Shadow Charm Gauntlet, she reverts to her true form, a white tiger. She and Bass then leave. 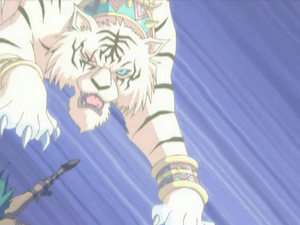 Although Tania reappears while Jaden and his friends are searching for Jesse Anderson in an alternate dimension (where all Duel monsters are made living and real), Bass is not shown to be with her at the time. However, it is revealed in one of Tania's flashbacks that he, too, entered a different dimension along with Tania (thought not necessarily the same one).