Batteryman C is a character appearing in Yu-Gi-Oh! Ultimate Masters: World Championship 2006 and Yu-Gi-Oh! GX Spirit Caller, based on the card "Batteryman C" 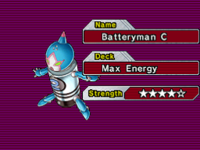 Batteryman C appears as a Duel Monster Spirit that can be unlocked as a partner for the player by defeating it multiple times. It can be found at the Power Plant after finishing the game's storyline.