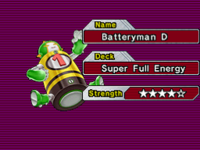 Batteryman D appears as a Duel Monster Spirit that can be unlocked as a partner for the player by defeating it multiple times. It can be found in the Power Plant after finishing the game's storyline.

Batteryman D's ability makes the player more likely to obtain higher-rarity cards from booster packs, with the likelihood becoming higher as the spirit is levelled up.

Batteryman D is a Level 1 Limited Duelist that challenges the player to a duel in which all players begin with only 1000 Life Points.