The Battle Beast, often abbreviated BB, is a character in the Yu-Gi-Oh! ARC-V anime. He is a member of Duel Academy and the most powerful student of Sanders. As he proved to be too violent to control, the Battle Beast is kept at Duel Academy.

The Battle Beast's design seems to be based two-fold, around a Roman gladiator (like his Deck) and also of an archetypal barbarian. While young, the Battle Beast is tall and rather muscular with a lean, well-built frame with a wide chest and large shoulders. His hair is reddish brown and very long, as it passes his shoulders and reaches his back, while also sporting two bangs, both of which almost reach his abdomen. Due to him wearing very little clothing, most of his frame is revealed. The only real clothes he wears are a pair of ragged trousers/shorts, which further emphasizes the brutish theme of his design. He wears a very simplistic necklace with three green fangs and two red orbs, with the center fang being visibly the longest of them. He also wears black wristbands, and has a white armband on his right arm's biceps. On the left side of his upper body, he has a black armband/gladiatorial-like shoulder pauldron, with orange studs around the circumference. Cementing his barbarian motif even further, he walks barefoot.

Blindly competitive and savage, to the degree of coming off as feral, the Battle Beast has no problem in defeating his own comrades and sealing them into cards. His savagery is exacerbated in the dub by having him speak in the third person. Even sealing his opponents may not necessarily save them from the Battle Beast's wrath; he once attempted to crush a card containing one of his victims. Even when calm, he is shown to be very arrogant and sadistic, reveling in others' fear and suffering while showing no restraint. When called out on his actions, the Battle Beast only responds with absolute indifference. His competitiveness can be used against him to a degree; Yuya Sakaki, Gong Strong, and Crow Hogan all exploited this in order to cause him to target them. His savagery is such that he is referred as being "Duel starved" and has show violent tendencies like physically assaulting his opponents if needed.

Despite his savagery and undeniable skill, the Battle Beast is cowardly; attacking from the shadows and retreating behind his Continuous Trap Cards when cowed. This is further reflected in his playstyle, given the tag-out effects of the "Gladiator Beasts". BB seems to struggle with dealing with constant pressure and threats from Sanders and dislikes taking orders from him. Ultimately, BB dislikes having to fight and only does so for self-preservation, when threatened with being sealed into a card, BB snapped and rebelled against Sanders.

The Battle Beast is extremely fast and agile, able to match the blinding speed of the ninja-trained Moon Shadow with ease, as well as deftly deny Yuya Sakaki (who was using Rollerboots at the time) access to Action Cards in a Duel. He is also skilled at using the "Predaprimal Jungle" to conceal himself. His camouflage isn't perfect, however, as Sylvio Sawatari was able to pick out his hiding place by the glowing of his eyes.

The Battle Beast was trained by Sanders to become the strongest Duel Soldier, but his sheer hostility caused him to Duel and seal anyone he encountered into cards. Due to this he was judged defective and imprisoned.[3]

When Sanders began a Survival Duel between the Lancers and five Duel Academy students, the Battle Beast joined the Battle Royal as well. He defeated and sealed Bernie into a card so swiftly that the change in numbers was barely picked up by those watching. He soon encountered Moon Shadow and engaged him in a Duel. Moon proved to be a more even opponent due to his comparable speed and agility, but the Battle Beast began to overpower him. Ted joined the Duel and received the intrusion penalty, allowing the Battle Beast to seize the chance to defeat the unprepared student with a single attack, before defeating Moon as well and sealing them both into cards. He later defeated and sealed Ethan into a card, before going after Sylvio Sawatari[1] and chased him until he fell off the Duel arena. When Sylvio reunited with Crow Hogan, he watched them until Emma and Jacob arrived. Battle Beast then joined the Duel between the four, receiving the intrusion penalty while they wondered where he was.[5] 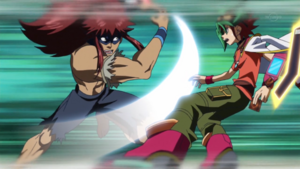 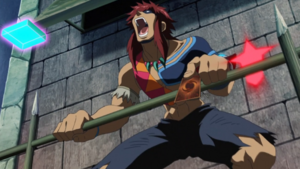 The Battle Beast howls in fury as he leaps to seal Sanders into a card. 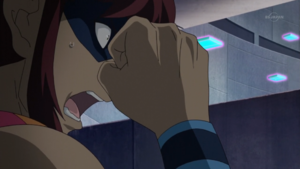 The Battle Beast becomes furious as he is unable to defeat Yuya due to Jack's interference.