Battle Ox, known as Minotaurus in the Japanese version, is a character version of the card "Battle Ox". He appears in Yu-Gi-Oh! ZEXAL, as the guardian of "Number 65: Djinn Buster".

He has a different color scheme than previous incarnations of "Battle Ox". This version has blue skin and his armor is yellow with silver trim. 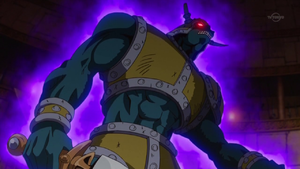 Battle Ox appears as the guardian of "Number 65: Djinn Buster"; he was defeated by Number 96 off-screen.[1]

Battle Ox had a Deck, which was not shown, since he was defeated off-screen.