From Yugipedia
(Redirected from Beast-Type)
Jump to: navigation, search
This article is about the Type. For the card part, see "Beast" (card part).

Beast monsters consist mainly of wild animals. They are typically EARTH Attribute monsters, although LIGHT and FIRE monsters of this Type are not uncommon. Beast monsters are often overlooked, but often have great utility. Because they are relatively low in number compared to more popular monster Types, there is no one specific theme or strategy common to them, though many have effects that assist them during the Battle Phase. Many Beast monsters are weaker utility monsters that splash well into other Decks, like "Nimble Momonga", but a few Beast monsters are potent on their own, such as "Green Baboon, Defender of the Forest", which Summons itself whenever ANY Beast monster is destroyed and sent to the Graveyard, "Master of Oz", which is one of the strongest Fusion Monsters available in terms of sheer ATK, and "Naturia Beast", which has a potent Spell Card lockdown. One Beast monster, "Rescue Cat", was previously only truly useful for setting up Ojama Fusions, but after the release of Synchro Monsters, it became a near-invaluable staple card by Summoning a Beast Tuner and another Beast monster for an immediate Synchro Summon; due to this, it was the source of many OTKs, and eventually became Forbidden, and then errata'd years later. This strategy has been supported in Duelist Revolution with the inclusion of several cards used by Team Unicorn, where as their Decks are based on Synchro Summoning using mostly Beast monsters to Summon their "Thunder Unicorn", "Voltic Bicorn", and "Lightning Tricorn", which are all Beast Synchro Monsters.

Archetypes include the "Ojama", "Sphinx", and "Koala" (anime only) monsters, as well as the "Nordic Beast" sub-archetype and "The Fabled" series. In addition, a good portion of the "Crystal Beast" monsters fall underneath this Type as well as the "Performapal" and "ZW -" archetypes. 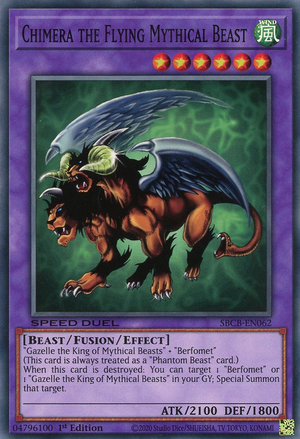