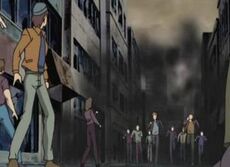 The black fog was a cloud of dark matter the Dark Signers spread throughout Satellite. Anyone who got engulfed by the fog had their body absorbed into it.

Crow had his Duel with Lazar aborted due to the appearance of the black fog. Lazar escaped using his balloon, while Crow managed to survive the ordeal by hiding in a refrigerator. Upon learning that the children he had been taking care of had become victims of the black fog, Crow vows to take revenge on the Dark Signers.