Black suits (黒服 kurofuku) are men dressed in black, who work for Maximillion Pegasus and The Big Five, in the Yu-Gi-Oh! anime. They typically serve security positions. The term "black suit" is used in the ending credits to refer to a number of them.

The recurring characters Kemo and Croquet may be considered black suits, particularly Kemo was initially credited as man in black suit (黒服の男). 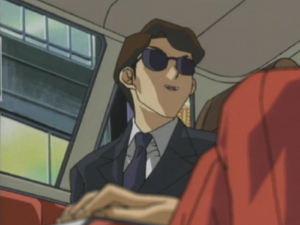 A black suit, who sat with Pegasus in his limousine after the Japanese National Duel Monsters Championship. He said that it seemed many elite Duelists would participate in Pegasus' upcoming Duelist Kingdom. However Pegasus said that none of the Duelists in the tournament that just ended excited him. Pegasus then asked about his "request", referring to the package prepared for Yugi Muto, to which the black suit replied it had been delivered. (In the English dub, rather than saying none of the tournament Duelists excited him, Pegasus said that it would hopefully attract those who possess the Millennium Items, which then led him to ask about the package for Yugi.)

In the ending credits, he is called secretary ( hisho) and voiced by Hiroshi Kikkawa.

Two black suits checked that participants had Star Chips before allowing them to board the ship.

Two black suits attempted to remove Joey Wheeler from the area after he was caught trying to board the ship without any Star Chips. They were unsure what to do when Yugi Muto offered one of his Star Chips to Joey. Ultimately they allowed it, but mentioned that they would be at a disadvantage by having only one Star Chip each. One of them then made a phone call to say they had a situation.

Two black suits began to restrain Joey when he caused a fuss over having to sleep in the ship's common room. They recognized him from causing trouble earlier. They let him go when he calmed down, while talking with Yugi, Rex Raptor, and Weevil Underwood.

Another black suit received a complaint from Mai Valentine, also over having to sleep in the common room. He nervously stepped backwards as she complained and told her that it was the rules. Mai left him alone when Rex invited her to his private room.

The Japanese ending credits for the episode mention man (男), man (男), and official (係員), voiced by Eiji Takemoto, Hiroshi Kikkawa, and Masaru Hotta respectively. These may refer to some of the black suits. 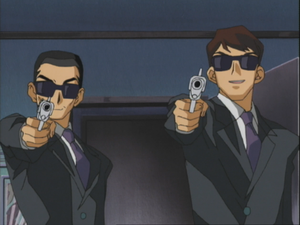 Two men sent to Seto Kaiba's office to capture him. They held him at gunpoint, but Kaiba knocked them back with a chair and deflected their gunshots with his duralumin case. Kaiba then jumped out the window, leading them to believe he died. (In the English dub, the guns were erased, making them men point their fingers at Kaiba and Kaiba immediately jumps out the window rather than making efforts to disrupt the gunfire.)

A number of black suits were sent to capture Kaiba at Kaiba Manor after Pegasus learned that Kaiba was still alive. Two of them hid in the bushes and reported when the coast was clear. At least six others then broke into the mansion and made their way to the computer room. But by the time they managed to open all the high-security doors Kaiba had left. They then reported to Croquet that he was gone.

In the Japanese ending credits two of the black suits with speaking roles are credited as black suit A (黒服A) and black suit B (黒服B) and voiced by Eiji Takemoto and Hiroshi Kikkawa respectively.

Three black suits guarded the dungeon at Pegasus Castle and searched for Seto Kaiba who had broken in. Two of them decided to watch over Mokuba's cell, while the other searched for Kaiba. Kaiba snuck up on the two guarding the cell and knocked one unconscious. The other drew his gun, but was immediately struck and knocked out by by Kaiba, who proceeded to take his key.

In the Japanese ending credits, all three of them are credited as black suit (黒服) and are voiced by Eiji Takemoto, Masaru Hotta, and Hiroshi Kikkawa. 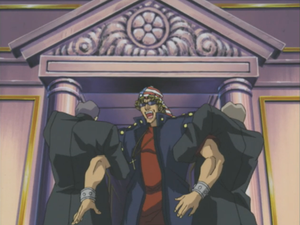 Two black suits removed Bandit Keith from the Dueling Arena in Pegasus Castle after he lost to Joey Wheeler and was called out on cheating by Pegasus. Keith overpowered and beat up the two suits, returned and pointed a gun Pegasus, who instead removed him by triggering a trapdoor.

In the Japanese ending credits, they are both credited as black suit (黒服) and are voiced by Eiji Takemoto and Hiroshi Kikkawa.

As behind Pegasus entered the Duel Arena, two black suits walked behind him. They later stood on a platform that was lowered into the arena, walked to each player, exchanged their Decks for shuffling, and returned them.

A black suit went into the dungeon to take over the shift of another black suit, who was keeping watch at Mokuba Kaiba's cell. Tristan Taylor, who was searching for Mokuba, heard the suit coming. So he hid himself in a suit of armor and the suit walked right past him. The suit met the previous shift holder and asked how Mokuba was doing. The other suit said he would not be running away, but insisted his colleague stay alert anyway. The suit sat down and readied a gun to begin his watch. He spoke to himself about how Croquet was being too cautious because Mokuba would not be going anywhere regardless of whether or not there was a guard. Tristan snuck up on him and asked if he was sure, before shoving a helmet on his head and knocking him out. Tristan then picked up his keys and used one to open Mokuba's cell.

As Mokuba's cell was unlocked, an alert was sent to a black suit in a control room. In turn, he notified Croquet of the possibility of a breach. He asked how Pegasus would like to deal with the intruder. Pegasus was Dueling at the time, but Croquet granted permission to something the suit suggested to him. Yami Bakura overheard the exchange and went to help Tristan.

In the Japanese ending credits, two of the black suits with speaking roles are credited as black suit (黒服) and are voiced by Hiroshi Kikkawa and Masaru Hotta.

Two black suits, part of the "A Squad" cornered Tristan, while he carried Mokuba's soulless body out of the dungeon. They drew their guns when Yami Bakura arrived to help Tristan. However Yami Bakura materialized "Chain Energy" from its card, which he used to momentarily restrain them, while he and Tristan escaped.

The two of them, accompanied by a third tracked Tristan and Yami Bakura down to a dead end in a tower and another two arrived as backup. Yami Bakura played a Shadow Game against the five, allowing them to use their guns as weapons, while he used his Duel Monsters Deck as his. Yami Bakura Summoned "Man-Eater Bug", which materialized and attacked the guards, whose gunfire had no effect on it. He Summoned "Morphing Jar" to also attack them and the five were sent to the Graveyard, where they were approached by the Reaper of the Cards.

In the Japanese ending credits, two of the three appearing in episode 36 are credited as black suit (黒服) and are voiced by Eiji Takemoto and Hiroshi Kikkawa. They are credited again in episode 37, along with Masaru Hotta as one of the others. 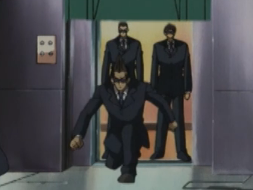 Two black suits went with Kemo to capture Mokuba when Kaiba was trapped in the Virtual World. By the time they got to the room with the VR pod, Mokuba had escaped through the ventilation shaft.

In the Japanese ending credits, they are both called black suit (黒服) and are voiced by Hiroshi Kikkawa and Masaru Hotta.