Blackbird is Crow Hogan's Duel Runner, which he inherited from Robert Pearson. Inspired by the legend connected with the Daedalus Bridge, the Duel Runner has a set of retractable wings.

The Duel Runner originally belonged to Robert Pearson. As Pearson died in a fire (sent to the netherworld in the dub), he asked Crow to take the Duel Runner, rather than let it get destroyed too.

Crow used the Blackbird in many Turbo Duels, and later sets up a delivery service with it called Blackbird Delivery.

The Blackbird used by Crow in Yu-Gi-Oh! ARC-V is similar to the one used on the World Racing Grand Prix. The only difference is the Team 5D's logo missing and features the holographic technology seen in the Duel Runners in ARC-V.[1] Much like in 5D's, it has a flight mode.[2] 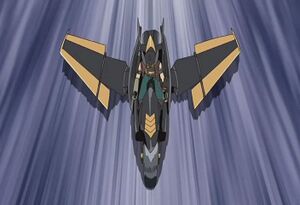 The Blackbird is capable of transforming into a flight mode, where it unfolds its wings and is propelled forward by jets on its rear. Its kickstand at the bottom also serves as a retractable grappling claw to help gain extra leverage for non-propelled flight, which saves Crow from falling off the dueling circuit during the fight against Greiger.

To some degree it is capable of emitting a small electric shock to unauthorized handlers.

Just like the Duel Runners used by Yusei and Jack, it is also a hybrid model, where the duel platform can separate from the bike and function as a Duel Disk. When Crow puts the Blackbird Disk in, the blade folds up into an upside-down horseshoe shape.

It contains a tracking device, so that Crow can tell when it is nearby, by detecting its signal on his Duel Disk.

A small box for items is later added to the back, which Crow uses for Blackbird Delivery.

The Blackbird contained the "Black-Winged Dragon" card in a hidden compartment. However, a password was needed to unlock this compartment. This compartment was completely unknown to Crow prior to his Turbo Duel against Bolton.

Crow wears two different helmets while riding the Blackbird; a silver helmet with goggles for delivery use, and a black helmet for all other purposes.

In Yu-Gi-Oh! 5D's World Championship 2010: Reverse of Arcadia, the Blackbird frame can be obtained by gathering all other frames.

In Yu-Gi-Oh! 5D's World Championship 2011: Over the Nexus, the Blackbird frame can be obtained by S-ranking Battle Royal mode on all difficulties.