Blair Flannagan's [sic] Maiden in Love is an event that occurred in Yu-Gi-Oh! Duel Links. It allows the player to unlock Blair Flannigan as a playable character. 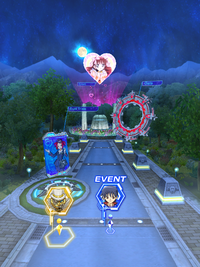 Duel World (GX) during the event

Blair Flannigan initially appears with her Level 10 Deck in Duel World (GX). After defeating her, she will start to appear in Duel World (GX); this appearance is time-based. She can also be Dueled against at the Gate. At first, she will only be able to be challenged at Level 10. To challenge her at higher Levels (up to Level 40), the player needs to defeat her at least once at the highest available Level (e.g. she needs to be defeated at Level 10 before she can be challenged at Level 20).

In order to challenge Blair Flannigan at a certain Level, the player needs to spend a corresponding amount of Special Lunches, which is as follows: 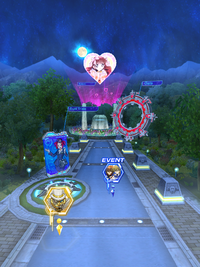 Duel World (GX) while a Pair Duel is available.

From May 16, 2020 onwards (February 28, 2020 during the first run), Jaden/Yubel & Alexis Rhodes can be challenged for a Pair Duel in Duel World (GX). The NPCs are paired with each other, and the player is paired with Blair Flannigan.

Their spawn rate is determined by the Love Meter. When it reaches 100%, Jaden/Yubel & Alexis Rhodes will spawn. The player can increase the Love Meter by Dueling in Duel World or Ranked Duels. If the player gains Love Meter while they are under 100% Love Meter, the amount over 100% is carried over after the Pair Duel. From May 18, 2020 onwards (March 2, 2020 during the first run), after a Duel, there is a chance the player will receive a Love Meter Boost, which will triple the amount of Love Meter gained in their next Duel. From May 20, 2020 onwards (unknown date during the first run), the chance of receiving a Love Meter Boost is increased.

When challenging Jaden/Yubel & Alexis Rhodes, the player can chose to Duel against their Level 20 or Level 40 Decks. At first, only the Level 20 Deck is available, and the player must defeat each lower level Deck to unlock the subsequent level. Depending on their Level, the player gains additional Duel Assessment after defeating them, with their Level 20 version rewarding an extra 2000 points, and Level 40 rewarding 4000. The event points multiplier is 16, regardless of their Level. They are more likely to drop Rainbow Packs than normal.

By winning a Pair Duel after accumulating at least 800,00 event points (1,200,000 during the first run), the player unlocks Blair Flannigan as a playable character.

From May 18, 2020 onwards (March 2, 2020 during the first run), when the player defeats Jaden/Yubel & Alexis Rhodes for the first time, Jaden/Yubel & Blair Flannigan will spawn in Duel World (GX) with their Level 40 Deck. While facing them, Alexis is partnered with the player instead of Blair.

This story takes place after the incidents from the Blair Flannigan is here! event. During the event, once the player logs into Duel Links for the first time since the event started (or if already logged-in, once the player enters a Duel World Area, if they weren't at one already), they will be greeted by a cutscene.

Blair Flannigan announces she's back in Duel Links, once again trying to win the heart of Jaden Yuki. This time, however, she plans on using her Special Lunches, described by her as "tastier than Eggwiches", in addition to her own Dueling.

Another cutscene will be played when the player Duels against Blair Flannigan for the first time using one of the following characters:

After defeating Blair Flannigan Level 10 at the Gate for the first time, she will appear in a cutscene and say "The power of love only makes me stronger!".

On May 16, 2020 (February 28, 2020 during the first run), a new cutscene is unlocked. Tyranno Hassleberry invites Blair to participate in a Pair Duel. At first she's happy, thinking that she would be partnered with Jaden, but Hassleberry tells her that he's already paired Jaden with Alexis, for being the top students in the Academy. As Blair gets angrier for not only being separated from Jaden, but also for him being paired with Alexis, Hassleberry tries to calm her down by saying that there is a way for her to Duel alongside Jaden, which is by using a special card exclusive to Pair Duels.

After defeating Jaden/Yubel & Alexis Rhodes Level 40, from May 18, 2020 onwards (March 2, 2020 during the first run), a new cutscene is played. Alexis scolds Jaden for not taking the Duel seriously, at which point Blair sees a chance to use "Partner Change". With Alexis' approval, they switch partners. Blair is very happy for finally being able to Duel by Jaden's side, and he does not seem to mind the change of partner. As Alexis sees that Jaden is content with her leaving, she sets out to beat both Jaden and Blair in the rest of the Pair Duel.

After defeating Jaden/Yubel & Blair Flannigan for the first time, a new cutscene is played. Jaden tells Alexis he always has fun when Dueling with her, and Alexis says she feels the same, as she destroys "Partner Change" with "Mystical Space Typhoon". Blair is forced to return to her previous partner, and angry that Jaden and Alexis are together again, she says she better win the Pair Duel this time.

Blair uses these Decks when she appears in Duel World or at the Gate.

Jaden/Yubel has the same Decks regardless of his partner, but the joint Deck name depends on who his partner is.

When Dueling against Blair Flannigan Level 40 or higher, these are the only cards that can drop; at lower levels, cards from the standard pool for Legendary Duelists may also drop.

The following missions were added on February 28, 2020.

The following missions were added on March 2, 2020.