From Yugipedia
Jump to: navigation, search
For other versions of this character, see Blair Flannigan (disambiguation).

Blair Flannigan, known as Rei Saotome ( レイ Saotome Rei) in the Japanese version, is an underage student and the only girl in the Slifer Red dorm. Initially a minor character appearing in a stand-alone episode during the first season, Blair joins the central cast at the beginning of the third after proving her worth as a Duelist.

In the first season, Blair was a shy, love-struck but highly intelligent young girl. She had an insane crush on Zane, but switched to a crush on Jaden by the end of her first episode. She has aced perfectly on all her entry exams and was almost ranked to Ra Yellow.

When she returned near the end of season 2, she kept her crush on Jaden but grew up greatly became much more developed, much more mature and even developed a sort of leadership role.

In the dub, Blair takes on a Brooklyn accent beginning with her reappearance at the second season's conclusion (though she seems to lose it later on). During her Duel with Chazz she also made some egg puns ("that's no yoke", "eggcelent"). In the original, she refers to herself with "boku," a word for "I" typically spoken by young males, though its use by females is not unheard of. Though in the Tag Duel against Jaden and Alexis, when speaking to Jaden, Blair called herself "watashi", a significantly more formal personal pronoun that females often use. She did this in order to show her respect to Jaden, since she has a crush on him. She also refers to Marcel (Martin) as "Marty" in the original.

When she was first introduced, she wore a standard Slifer Red jacket and boots with gray pants ending at the ankles. To hide her hair she disguised herself as a boy, she then wore a clip with both a large hat and an orange bandanna. When Blair returned near the end of season 2, she was once again disguised, since she still used her bandanna and wore a kabuki mask. She now wore a sleeveless orange shirt under an dark blue and aqua version of the Obelisk Blue jacket with blue jeans and lilac boots. Starting from season 3, Blair's main outfit consists of her orange shirt, a Slifer vest, black shorts with a slanted brown belt, black socks that went slightly above her knees and newly designed Slifer boots. She continued to wear this outfit even after she became an Obelisk.

Her original Japanese name, "Rei" means "bell" or "lovely". It could be an allusion to the series "Neon Genesis Evangelion", a series in which the primary female protagonists were named Rei and Asuka. Her last name, "Saotome," means "fast maiden". It could also be a reference to the popular martial-arts romance manga "Ranma 1/2," which featured a gender-switching protagonist named Ranma Saotome. This is relevant since she first appeared in the GX anime disguised as a boy. Her English name, "Blair," means "plain" or "field."

Blair as she appears in Season 1, disguised as a boy and when her identity was revealed.

Blair is a transfer student who enters Duel Academy during her first year disguised as a boy. She is placed in the Slifer Red dormitory, and guided by Jaden, Syrus, and Chumley. Behind her guise, Blair intended to get closer to Zane, with whom she was in love. While sneaking around Zane's room in Obelisk Blue, she is caught by Jaden, who discovers her secret and pursues her on the matter late at night after the confrontation. The two Duel, and although Blair is defeated, she finally has the opportunity to meet with Zane. He is flattered by her affections, but turns her down, telling her to go home. Being a fifth-grade elementary student (second grade in the English dub), she is forced to leave the school on the technicality that she is too young to stay. As she departs, her feelings shift from Zane to Jaden, much to the latter's horror.

Blair as she appears in Season 2, masked and unmasked

During the second year, Blair returns near the end of the Genex Tournament and challenges Zane following his "rebirth," but he declines, and she instead Duels with Chazz to claim the champion title of the tournament and officially enter Slifer Red. Despite overwhelming improvement in her skills that allow her to push him into a corner, Chazz is able to claim victory in the end.

At that time, an integral part of Blair's personality becomes clearer. Her love interests are constantly changing, as evidenced by her brief admiration of Chazz, but that was due of Chazz saying the same lines as Jaden, who she still has a crush on. 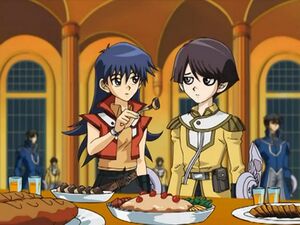 Even though she lost to Chazz, Blair is admitted to Slifer Red, and becomes a member of the central cast at the beginning of the third year. She tries to befriend Marcel during that time, but mostly proves unsuccessful. She commandeers Chazz's room, forcing him to bunk with Jaden.

When Duel Academy gets sent to the alternate dimension, she gets attacked by Yubel when she gets near Marcel and comes down with a mysterious illness. Jaden, Jesse, Axel, Jim, and Adrian get medicine from a submarine that Bastion saw. She gets healed by this medicine soon after. After recovering she later sees the Yubel-possessed Marcel Dueling Jaden and Jesse. She shows that she cares for Marcel when she demands the spirit release him, which it does, and then throws Marcel at her (Yubel willingly left Marcel because she didn't need him anymore).

At the start of the fourth season she gets promoted to Obelisk Blue, but she still wears her red jacket.

Blair is paired with Tyranno Hassleberry in a Tag-Team Duel tournament. The pair Duel against Jaden and Alexis. During the Duel, she takes advantage of Alexis's frustration with Jaden and uses "Partner Change" to switch partners (wanting to be on the same team as Jaden because of her crush on him). Jaden worked much better alongside Blair than with Alexis. When Alexis noticed that Jaden had gone back to enjoying Duels, she switched back (much to Blair's chagrin). The reunited pair of Jaden and Alexis then went on to win the Duel.

It is assumed she was later absorbed into the World of Darkness and was revived when Jaden defeated Nightshroud. She is returned upon Nightshroud's defeat, and runs to Jaden to give him a hug.

Blair's initial deck is a Love deck focusing on "Maiden in Love", using it to take control of enemy monsters and turn them against their user. She further uses support for the Maiden like "Cupid's Kiss" and "Happy Marriage" to optimize this strategy.

During the Genex Tournament, Blair uses a Mystic deck. The deck's full mechanics are not explored, but it seems to revolve around summoning monsters by the effect of "Mystic Egg" and using "Mystic Revolution" to evolve them into powerful high-level forms.