Blast Asmodian is a character version of the card "Blast Asmodian". It appears as a member of the Supreme King's army.

In GX Spirit Caller, he appears as a Duel Monster Spirit under the name Vanity's Fiend though this was a mistake. By beating him a few times, he can be unlocked for use by the player. He can be found at the east side of Duel Academy.

In GX Spirit Caller, Blast Asmodian has the ability to allow the player to get Duelist appearances. To improve this ability, the player has to level up the spirit by Summoning the corresponding card in a Duel and winning.

In World Championship 2007, he appears as a Level Five Theme Duelist and he challenges the player to form 5 or more Chains. By beating him, the player gets closer to unlocking Level Six Theme Duelists and a new booster pack. 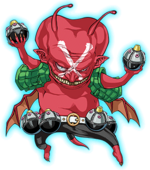 In Yu-Gi-Oh! Duel Links, Blast Asmodian appears as an opponent in the D.D. Tower: Fire Dimension event as one of the Tower Monsters.