Blaze, known as Honōmaru in the Japanese version, is a member of the Light Brigade in Yu-Gi-Oh! GX who works for Sarina. 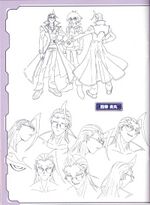 Linework of Blaze, showing his relative size in comparison to Jaden Yuki.

Blaze is a tall young man with grey eyes, long orange hair that has a large bang standing up, eyebrows in the shape of flames, studs in both ears, and orange glasses. He wears a long black coat with red edges, a grey shirt, a silver card necklace, light grey pants, and black shoes.

Blaze is easily offended; he was irritated by Frost pawning off Syrus Truesdale's body onto him, and angered at being dismissed by the Duel Academy students because he failed to enter the Academy.

The "Honō" portion of his name in the Japanese version is derived from the word "honō" (炎), meaning "fire" or "blaze."

Blaze possesses fire-related abilities; he can transport himself and others in a burst of flames.

Blaze and T-Bone attempted to enter Duel Academy, but they failed the entrance exam.

Blaze and T-Bone were called by Frost to take the unconscious Syrus Truesdale and Tyranno Hassleberry to Kaiba Land, much to Blaze's detest. When they returned, Sarina gave them the cards that contained Frost and Thunder, warning them that the same fate awaited them if they failed to find Jaden Yuki. He and T-Bone quickly fled, but realized quickly that they didn't know what Jaden looked like. Luckily for them, Jaden shared burgers with them, and they struck up a conversation about Duel Academy where Blaze revealed to Jaden that he and T-Bone had themselves once applied for Duel Academy but failed their first entrance exam. He challenged the students to Duels, and Jaden and T-Bone went first. To their shock, Jaden revealed his name, and Sarina, who had been watching them, sealed Blaze into a card in order to add "Thestalos the Firestorm Monarch" to T-Bone's Deck. Blaze was seen in Kaiba Land alongside the other Light Brigade Duelists, and freed after Jaden and Aster Phoenix defeated Sarina.

Blaze's signature card (and also the only one of his that was shown) is "Thestalos the Firestorm Monarch".