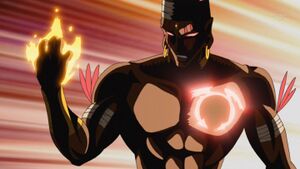 Blazing Soul, known as Burning Soul in Japanese and as Burning Force in the English version of Yu-Gi-Oh! 5D's Tag Force 5, is a power possessed by certain Signers in the Yu-Gi-Oh! 5D's anime that allows the wielder to take on the powers of the Crimson Dragon itself and create a miracle. It also has the ability to seal away any monster, including an Earthbound Immortal, and allows the Signer to obtain the power of that monster. 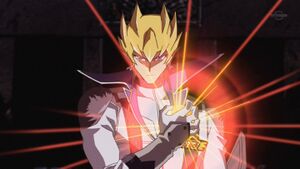 Jack obtains Blazing Soul in the Duel with the Familiar of Red Nova.

During the ancient battle between the Crimson Dragon and Red Nova, the Legendary Signer utilized Blazing Soul to seal Red Nova in the serpent geoglyph.

Eight thousand years later, Jack Atlas gained this power during the duel with the Familiar of Red Nova using it to seal the Crimson Devil, Red Nova, itself into a card to create "Red Nova Dragon".

In the Yu-Gi-Oh! 5D's manga, Jack Atlas used the Quick-Play Spell "Burning Soul", which is based on this power.