From Yugipedia
Jump to: navigation, search
"Saiga" redirects here. For the card called "Saiga" in the English manga, see "Torike".

Blister, known as Saiga (雑賀, Saiga) in the Japanese version, is a character from the Yu-Gi-Oh! 5D's anime. Blister has described himself as a jack of all trades.[1] Among his skills are the abilities to hack into databases and construct useful items.[2]

Blister has an unkempt appearance, sporting stubble. He also has short brown hair and brown eyes. His attire consists of a sleeveless, green jacket with a ripped design along the shoulders which he wears over a long-sleeved white shirt. He also wears brown pants with two belts, one of which has a Deckbox attached. In the past, Blister wore an orange neckerchief. During his trip to Satellite, Blister wore a brown fedora.[3]

Originally, Blister was a happy person, but after his friendship with Aero faltered, he developed a pessimistic outlook on friendship, valuing the company of technology and himself over others.[1] After Yusei told him that Aero most likely sent "Machina Sniper" to him as a sign of their friendship, he began to trust in bonds again, even risking himself getting arrested to assist Yusei.[4]

Blister was a successful Tag-Team Duelist alongside a man named Aero in the Exhibition League. However, they had reached the end of their growth as a team and Saiga sought to end their tag-team to reach higher, but could not figure out how to do it without hurting his friend. During one Duel, a collision with their opponent's Duel Runner resulted in the sidecar being separated from Blister's Duel Runner. Despite his best efforts, Blister couldn't reach Aero in time before he crashed into a tower which resulted in an explosion, crippling Aero in the process. It turned out that Aero had risked his life in an attempt to save the "Machina Sniper" card that was so dear to the both of them. The card was later sent to Blister, but he saw it as a spiteful message for walking out on Aero.[1]

After Yusei defeated Mr. Armstrong, Bolt Tanner gave him the "Giant Ushi Oni" card, telling him that if he shows it to Blister in Bootleg, he'll lend him a hand.[5] Doing so, Yusei ended up being followed by Rex Goodwin's men. After finding the bar, Yusei showed the barman Bolt's card and he arranged for Blister to meet Yusei outside. Blister then appeared on his Duel Runner, collecting Yusei and jamming his criminal mark in the process so they wouldn't be followed. After arriving at his apartment, he told Yusei that he needn't worry about payment as Bolt had already paid him before entering The Facility. When he found out Yusei intended to infiltrate the Security storage warehouse, he was shocked, but agreed to help anyway, developing a fake persona alongside an ID card and an outfit for Yusei to use to gain access to the building. After Yusei found a picture of him from the past and asked him about it, he scolded Yusei for touching his stuff without permission. Blister later chides Yusei after finding out he was risking so much for friendship. Ignoring this, Yusei exited his apartment without saying anything. He then noticed Tetsu Trudge following Yusei. After Yusei had been locked into the warehouse by Sector Security, Blister called Yusei, telling him to drive toward an elevator shaft.[1]

Blister destroys the elevator doors, allowing Yusei to free fall down the shaft to the bottom floor, allowing him to escape. He later joins Yusei in the building, kicking Trudge and knocking him off of his Duel Runner in the process. After Yusei reassures him that Aero sent "Machina Sniper" in an attempt at salvaging his friendship, he realized how much of a fool he had been. When Yusei defeats Trudge with "Turbo Warrior", he begins to ram his Duel Runner into Yusei in an attempt to stop him. Seeing this, Blister intercepted which caused the two of them to crash. He then told Yusei to carry on.[4] Blister managed to escape and wondered what Yusei was going to do while in Tops.[6]

Blister later accommodated Yusei in a back-alley condominium where he'd be able to live during his stay in New Domino City. He then apologizes to Yusei, informing him that his marker jammer's effects have worn off, meaning that Yusei's marker is transmitting his location to Sector Security, but Yusei says that he doesn't care with Blister saying he has "nerves of steel".[2] Upon asking Yusei why Sector Security is so interested in him, he finds out that they're forcing Yusei to enter the Fortune Cup with his friends being used to blackmail him into doing so. He then asks Yusei if he can borrow the photo of his friends, stating that he's going to see how they're doing. After Bolt and Tenzen Yanagi arrive, Blister spectates the Duel between Yusei and Bolt, thinking to himself how amazing Yusei is for what he's done, befriending him and Bolt included. He was shocked when Jack Atlas arrived. He later informs Yusei that he's struck a deal to be able to go to Satellite and to leave it to him whilst he deals with the Fortune Cup. When the bystanders began to run out of fear when the Black Rose appeared, he told the others that they should run, but they were struck by one of the vines from the attack of "Black Rose Dragon" before they could do so. Blister also took interest in the reaction that the witch gave when she saw Yusei's birthmark, shocked to hear that she may too also be a Signer.[2]

After arriving in Satellite, Blister traveled to the black market with his contact who advised him to be on the lookout for Security. Blister then managed to locate Yusei's hideout but no one was there with there being signs of a struggle. He then contacted Yusei to inform him of this, telling him that he'll continue his search throughout the rest of Satellite as his friends weren't logged into the Security database.[3]

When Yusei returns to Satellite to visit his friends, Blister was at his hideout too.[7] He later enters the B.A.D. area of Satellite alongside Yusei's friends in order to visit Crow's hideout, noticing the Daedalus Bridge on the way. At the hideout, he discussed the Dark Signers with Yusei and listened to Crow's story about the legendary man of Satellite. After Yusei and Crow left in order to find Dark Signers, Blister stayed behind with the orphans whilst Yusei's friends looked for him.[8] After Yusei was critically injured by Kalin Kessler and his "Earthbound Immortal Ccapac Apu", his friends salvaged his Duel Runner and attempted to take it to Martha's house, but on the way, they were tricked by criminals who attempted to steal it. Blister posed as a Sector Security officer, shining a light on the criminals who ran away, leaving the Duel Runner.[9]

He returns with Yusei and the rest of the Signers when they return to Satellite to take on the Dark Signers and is there to witness the fall of Martha, Yusei's foster mother.

Following the defeat of the Dark Signers as well as Rex Goodwin, Blister meets up with Yusei again when he, Jack and Crow hear about the story of Bashford.

Blister is present with Lazar, as Lazar leaves his family at Martha's refuge.[10]

After hearing about the news of the Divine Temple, Blister manages to find an old school bus which ran on fuel rather than Ener-D, allowing him to transport Martha, Dr. Schmidt, Lazar's family and the orphans away from New Domino City.

In episode 150, he, Martha, Dr. Schmidt, and all Marha's children are cheering for Yusei.

Blister appeared alongside Yusei's other friends when he thought about all of the people who are supporting him. 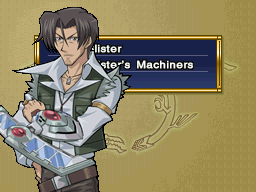 Blister, in Over the Nexus

Blister appears in the 5D's installments of the World Championship videogame series as a supporting character and a duelist the player can duel and partner with.

The only known card in his and Aero's Deck is "Machina Sniper".