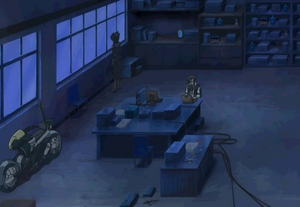 Blister's apartment is the residence of Blister. It is located in New Domino City. It is primarily used by Blister as a base of operations for developing and constructing his gadgets. He keeps a memento here in the form of a damaged "Machina Sniper" card, in memory of his friendship with Aero.

Blister brought Yusei here after he rescued him from being followed by Rex Goodwin's henchmen. Here, he worked on developing a fake identity for Yusei to use in order to gain access to the Security storage warehouse.[1]

After the Fortune Cup, Yusei, Bolt Tanner, Yanagi, Leo and Luna all stayed here where they discussed the Crimson Dragon and Signers. That night, Yusei spotted a Shadow Drone outside, causing him to leave the apartment in order to pursue the person.[2] The morning after, Yusei returned shortly, before Tetsu Trudge arrived and said he would haul him due to the city no safe refuge for him.[3]

After Carly Carmine destroys the Arcadia Movement building with "Earthbound Immortal Aslla piscu", the player lives in Blister's apartment, sleeping on the sofa.