The bllood puzzle was a riddle game in the manga and Toei anime, played during Death-T.

The lines and circles making up the letters in "bllood" can be viewed as 1s and 0s, making it "10 11 00 01". These are also the numbers labelling the switches. The 11 contains an arrow pointing downwards, indicitating that the exit is in the basement. Since the eleven is used to find the exit, it is the solution to the riddle, so pressing its button stops the blade and releases the hands.

Yugi, Jonouchi, Anzu and Honda had to play this during Death-T. Yugi had previously found the sheet of paper with the bllood clue, while searching the mansion for an exit. A hologram of Kaiba appeared before Yugi and his friends, telling them that the murderer, the Chopman, was in the mansion and in order to find the exit, they must put their hands inside the holes.

The group struggled to find the solution. After some encouragement, Yugi managed to find the answer last second, saving him and his friends and revealing a trapdoor exit. 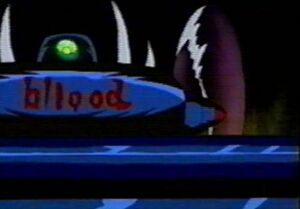 The machine used in the game.

The anime version of the bllood puzzle plays similarly to the one in the manga, set as a stage in the Death-T. This time, Yugi and his friends are all separated by the floor, with each of Yugi's friends holding down a lever that controls a slowly advancing machine. The machine is the one to have "bllood" written on it, and would crush Yugi and his friends if the answer was not found in time. Releasing the correct lever would stop it, while releasing the wrong one would speed it up.

Unlike the manga version, Kaiba also leaves Yugi and his friends with a hint, saying that the machine "doesn't like it when its name is spelt wrongly", hinting at the intentional misspelling of "bllood". Also, none of Yugi's friends were allowed to move - only Yugi was allowed to make the decision on which lever to release.